After months of confirmation hearings, the vast majority of President Joe Biden’s top advisers are in place. Biden made history with a number of his picks, constructing a diverse Cabinet that’s reflective of America.

According to an NPR analysis, white men made up 32 percent of Biden’s Cabinet picks as of early February, with women accounting for 45 percent of the group and racial minorities accounting for 55 percent. Biden has more women and minorities in his Cabinet than former Presidents Donald Trump and Barack Obama included.

Stepping back from the overall data, there are several historic firsts. From the first Black secretary of defense to the first Asian American US trade representative to the first Native American interior secretary, Biden has often chosen heads of his agencies that will bring their lived experience to the job.

The majority of Biden’s nominees have been confirmed on bipartisan votes; just one nominee — Neera Tanden, who was Biden’s pick to head the Office of Management and Budget — withdrew after it became clear she didn’t have enough support. Interior Secretary Deb Haaland’s historic confirmation vote was close, 51 to 40, even though Haaland received four Republican votes. So far, US Trade Representative Katherine Tai is the first Biden Cabinet pick to receive a unanimous Senate vote.

Biden’s Cabinet members have their work cut out for them on a number of issues. Beyond continuing to deploy Covid-19 vaccines and get the country’s economy back on track, they must also face the existential crisis of climate change, address the growing number of Central American migrants traveling to the border, and deal with China’s dominance on manufacturing, among many other issues.

Here’s a rundown of the key members of Biden’s Cabinet.

Mayorkas, who is originally from Cuba, is the first Latino and immigrant confirmed as homeland security secretary. He previously served as the deputy secretary of homeland security from 2013 to 2016, and as the director of US Citizenship and Immigration Services from 2009 to 2013. Mayorkas’s most immediate challenge as DHS secretary is dealing with a surge of Central American migrants — specifically unaccompanied minors — traveling to the southern border. 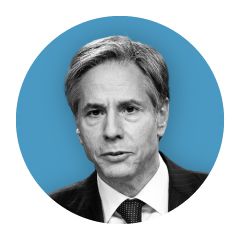 Blinken has a long working relationship with the president on foreign policy, an area Biden was steeped in as vice president and as a senator. Blinken previously served as deputy secretary of state and deputy national security adviser during the Obama administration. During Obama’s first term, Blinken served as Biden’s national security adviser and previously worked with Biden as a top staffer on the Senate Foreign Relations Committee.

Blinken’s tenure is expected to be a departure from Trump’s “America First” agenda, emphasizing the importance of America’s alliances with foreign nations around the world. Tensions with progressives have arisen over how much to change course, however. 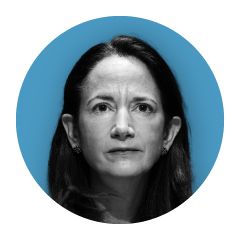 Haines is the first woman director of national intelligence, overseeing a US intelligence community whose leaders are often overwhelmingly male. She previously served as assistant to the president and principal deputy national security adviser to President Obama, and Obama also named her deputy director of the CIA. Like Blinken, Haines also worked on the Senate Foreign Relations Committee, where she worked with Biden. 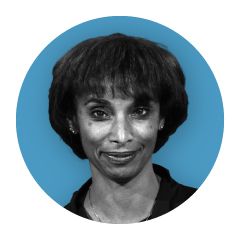 Cecilia Rouse, Chair of the Council of Economic Advisers

Rouse, the first Black chair of the Council of Economic Advisers, is a well-known labor economist. A lot of her past government and academic work has focused on using economic policy to address social issues. A veteran of both the Clinton and Obama administration, Rouse worked at the National Economic Council as a special assistant to Clinton in the late 1990s, and served on Obama’s CEA — the same body she now chairs. 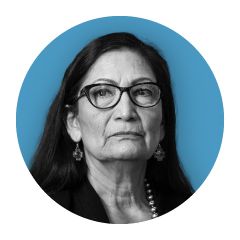 Deb Haaland, Secretary of the Interior

Haaland has served as a member of Congress from New Mexico since 2019. As a member of the Laguna Pueblo Native American people, she’s the first Native American to be interior secretary. Haaland’s role as head of the Department of Interior is especially significant; it’s an important department that has had an adversarial history with many tribal nations since its founding in the mid-1800s. Many tribal nations supported Haaland’s nomination because they believed she would be especially attentive to key issues like tribal lands. 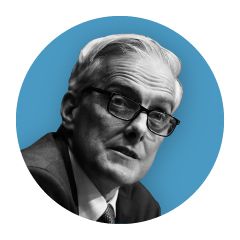 Biden’s pick to head the VA doesn’t have a military background; in fact, he’s just the second non-veteran to lead the agency, per Military Times. But what McDonough lacks in military experience, he has vowed to make up for with extensive past service in the federal government. McDonough served in a number of roles in the Obama administration, including a long stint as White House chief of staff from 2013 to 2017. Previously, McDonough served in various national security roles, including deputy national security adviser and chief of staff of the National Security staff. 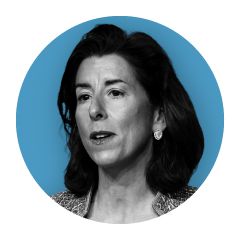 Raimondo previously served as governor of her home state of Rhode Island, where she was in office from 2015 to 2021. Previously, she served as Rhode Island state treasurer and worked in the private sector as a venture capitalist before that. Raimondo has said she’ll focus on increasing nationwide access to broadband to help grow small businesses. 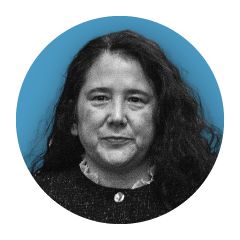 Guzman served as the deputy administrator of the Small Business Administration in the Obama administration, and most recently worked as the director of California’s Office of the Small Business Advocate. Guzman’s immediate work will be overseeing and approving small-business loans through the Paycheck Protection Program to help small businesses stay afloat through the remainder of the Covid-19 pandemic. 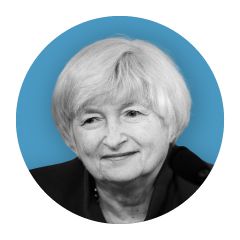 Janet Yellen, Secretary of the Treasury

Yellen is a longtime economist who has a wealth of experience in top economic positions in government. She’s the first woman to lead the US Treasury, among other firsts in her roles in government. Yellen has served under Democratic and Republican administrations alike, chairing the Federal Reserve from 2014 to 2018. Yellen has primarily been focused on the administration’s economic recovery, advocating for a strong Covid-19 relief bill and involved in planning for a larger recovery bill to be introduced in the coming months. 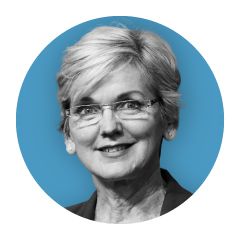 Granholm served as the governor of Michigan from 2003 to 2011, and previously served as that state’s attorney general. As governor, Granholm developed a close relationship with the American auto industry in Detroit, which will be important in her current role helping lead the United States’ response to climate change and move to clean energy and electric vehicles. 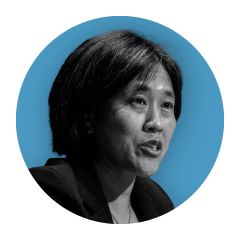 Tai is another historic pick; she’s the first Asian American to serve as US trade representative. Tai previously served as the chief lawyer on trade for the House Ways and Means Committee and is an expert on trade issues with China, which the Biden administration is looking to compete with on manufacturing and other trade-related issues. 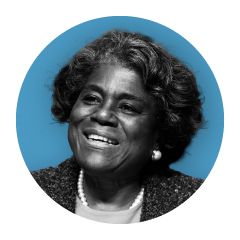 Linda Thomas-Greenfield, US Ambassador to the United Nations

Thomas-Greenfield is a 35-year foreign service veteran, and the second Black woman to hold the post of UN ambassador. Under the Obama administration, she served as the assistant secretary of state for African affairs from 2013 to 2017. She has her work cut out for her to restore the US footing on the international stage, after President Trump spent four years isolating allies. 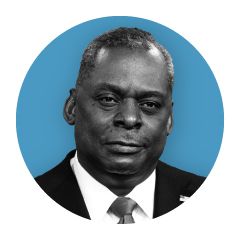 Austin, a four-star general, is the first Black secretary of defense. He served as the 12th commander of United States Central Command, overseeing US military operations in the Middle East. Austin required a congressional waiver to be confirmed, as current law doesn’t allow the role to be filled by those who have served in uniform on active duty in the past seven years. 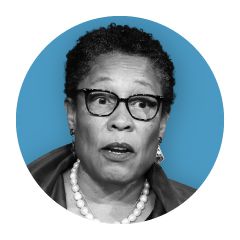 Fudge is a longtime member of Congress from Ohio and a former chair of the powerful Congressional Black Caucus. Fudge had initially said she wanted to serve as agriculture secretary — an area she has experience in and an agency that has not been led by a Black woman. As housing secretary, she’ll focus on housing insecurity many families have experienced in the wake of the Covid-19 economic crisis, as well as equity issues in housing. 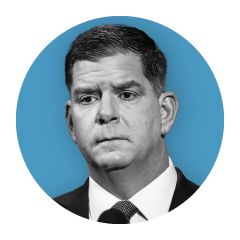 Walsh most recently served as mayor of Boston, and is seen as a pick for the Department of Labor who is highly favorable to unions. Walsh has a union background; he joined his local laborers union at age 21 and eventually worked his way up to lead the labor group Boston Building Trades before becoming mayor. Walsh will likely be working on pandemic-specific labor issues like OSHA safety and hazard pay, but will also be focusing on updating labor regulations made more business-friendly than worker-friendly under the Trump administration. 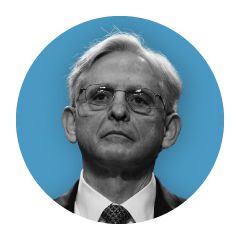 Garland is a longtime judge who has served on the US Court of Appeals for DC since 1997 — and since 2013 as its chief judge. Garland is also well known for being Obama’s US Supreme Court nominee who was stonewalled by Senate Republicans in 2016, not even receiving a hearing, much less a vote. Now Garland will be tasked with running the Justice Department, which will focus on a wide swath of issues from a rise in domestic terrorism to enforcing civil rights cases. 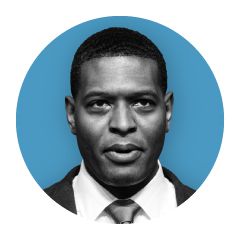 Regan comes from a state-level position; he most recently served as secretary of the North Carolina Department of Environmental Quality. Heading up the EPA, Regan will be tasked with implementing many key environmental regulations slashed by the Trump administration. First, Regan will be tasked with rebuilding an EPA that was decimated under Trump; over 800 EPA employees left the department during the Trump administration. 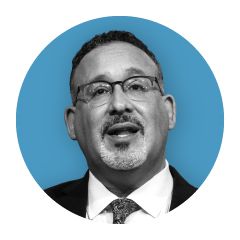 Like Regan, Cardona also comes to the Biden administration from state-level government, previously serving as the Connecticut commissioner of education from 2019 to 2021. Cardona started his career as a teacher in Connecticut, worked his way up as a principal and school district administrator, and then joined the state’s education department. Cardona’s biggest challenge will be preparing schools to reopen after the Covid-19 crisis, but he’ll also be dealing with issues of racial equity, higher education, and aging school infrastructure. 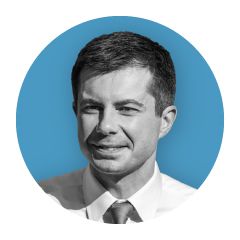 In recent years before joining the Biden administration, Buttigieg served as mayor of South Bend, Indiana, and competed against Biden in the Democratic primary for president. Buttigieg’s primary focus will be transportation infrastructure, including projects like increasing the number of electrical charging stations on the nation’s roads. 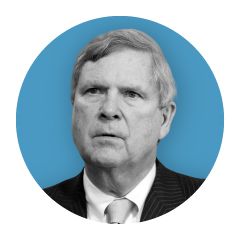 Vilsack is very familiar with this role; he served as secretary of agriculture during the Obama administration as well. He is also the former governor of Iowa, a state where farming and agriculture dominates the local economy. Vilsack has received some pushback from progressives, who are concerned about his ties with corporate agriculture. 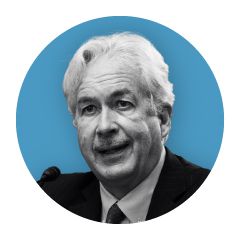 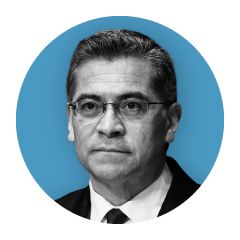 Becerra most recently served as attorney general of California, where he has focused in part on health care antitrust issues, cracking down on health care monopolies in the state. Before that, he served for 12 terms as a member of Congress from California. Becerra is the first Latino secretary of HHS.

There are still some unconfirmed positions

Biden still has two Cabinet-level picks that are not yet confirmed, including the president’s nominee for a science advisory role, Eric Lander, and a yet-unnamed pick for the Office of Management and Budget. 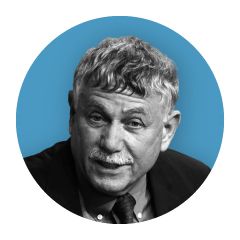 Eric Lander, nominated as Director of the Office of Science and Technology Policy

This position is newly elevated to a Cabinet-level role, a sign that Biden wants his White House guided by science after the Trump era. Lander is a geneticist and molecular biologist who most recently served as president and founding director of the Broad Institute of MIT and Harvard. He worked in the Obama White House from 2009 to 2017, serving as co-chair of Obama’s Council of Advisers on Science and Technology. But he’ll have even more clout inside the White House, which has a hand in deciding how money will be allocated to various scientific agencies.

Trump supporters are dropping lawsuits that query voting ends in 4 states. That is one other setback to undo Biden’s victory

6 John Lewis speeches key to understanding his work and legacy