The 90-minute concert / telethon / plea for national healing that aired Wednesday night to end Joe Biden’s housewarming ceremony had no reason to exist.

Some moments were solid. John Legends cover of Nina Simone’s “Feelin ‘Good” rose. (I’m a sucker for a well-run horn department.) Justin Timberlake and Ant Clemons played a driving version of “Better Days” that wandered in and around and outside of the Stax Museum in Memphis.

Other moments were less than solid. Katy Perry’s performance of “Firework” didn’t give her a particularly good voice, as amazing as the backdrop of the actual fireworks on television was. Tom Hanks was strangely stiff all night, the way America’s father is seldom. And how on earth has anyone filmed three ex-presidents (Bill Clinton, George W. Bush, and Barack Obama) “talking on the fly” without realizing they were terribly backlit? Because of the shadows, you could hardly see their faces.

But also, who cares? Unless you’re a mega-stan of any of the artists who performed (or Joe Biden, I think), you probably didn’t pay close attention to the specifics of the special, or even saw it. (The American # 1 cable news network, Fox News, didn’t bother to air it, but instead opted for the regular nightly boiling lineup.) The celebration of America existed because there was a housewarming special – usually with some musical performance and some speeches and some inspiration – always exists. Even at a time when social distancing regulations make big celebrations literally impossible, the show has to go on. Does anyone have any better ideas?

Anyway, isn’t that a metaphor for America?

Business as usual, in unusual times

Celebrating America had to strive for a particularly difficult tonal balance. It couldn’t be so grumpy to scare off a nation hoping for better days, nor so hopeful to scare off a nation going through the exact opposite of those better days. The particular species chose “neither” nor “both” at the same time, which was as awkward as one might expect. Most of the time the special was there. It was a thing to turn on to remind yourself of a time when everything worked vaguely.

Joe Biden’s election to the highest office in the country has sparked all sorts of public and private discussions about what this actually means. Is America the country that Obama voted for twice (and Biden once) or the country that Trump voted for this time? Is it a land of center-left technocrats, slowly being dragged to the left by an increasingly loud left movement, or a land of angry white resentment that is forcing everyone to crash off a cliff?

But here, too, the answer is “neither” nor “both”. Clearly, the US voted for Obama, Trump and Biden in three consecutive presidential elections. So we are both versions of the land described above. But neither are we, because the electoral college gives Republicans sufficient advantage that Biden’s massive referendum victory could easily have been erased by a handful of different votes in a handful of states. After all, the Democratic candidate Hillary Clinton was the winner of the 2016 referendum. The truth is more difficult than a simple either / or.

This “both or both” distinction was present throughout Inauguration Day, which at all times felt like a newly elected president and his team doing their best to pretend everything was normal when very little was normal . Yes, they insisted, the challenges we face are considerable, and they acknowledged that we are more divided than ever as a nation. But look! The peaceful transfer of power still exists! Don’t pay attention to the uprising two weeks ago!

The thing is, cultivating a sense of cautious hope is probably the right strategy. I have no illusions that Joe Biden will achieve anything I believe would actually move this country forward. But for anyone on the left of the political spectrum, it brings a sense of relief to just not have Donald Trump in the White House. Say what you want with Biden, but he knows where the keys are to everything in government. He will (hopefully!) Distribute the Covid-19 vaccine much better than the previous administration. That alone will be a worthy feat.

But I’m not sure Celebrating America sold me anything other than “Joe Biden is not Donald Trump”. And that’s right – it isn’t. But shouldn’t there have been more?

A sigh of relief makes sense at this moment. But we cannot lose sight of the American identity crisis. 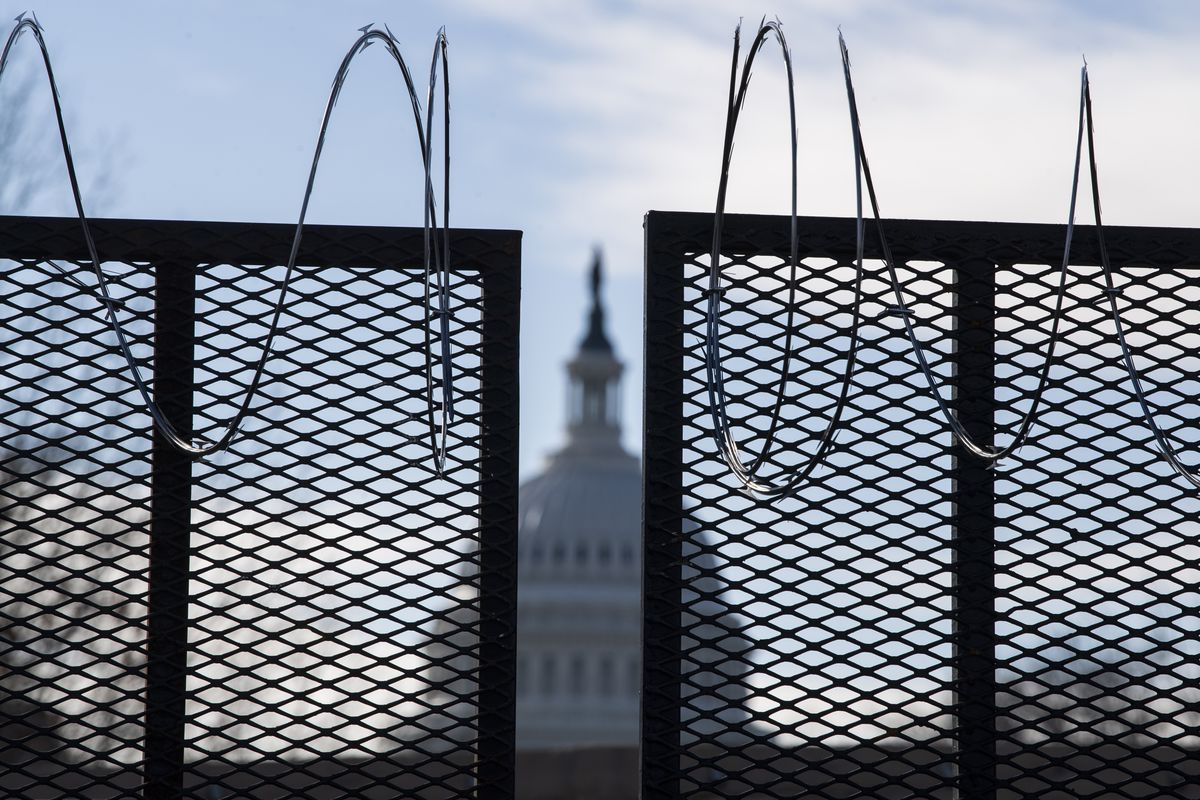 In the run-up to the inauguration, barbed wire surrounds the US Capitol. Tom Williams / CQ Appeal Inc. via Getty Images

The celebration of America – and Inauguration Day in general – was full of people talking about America fighting some of its greatest enemies of all time. And lyrically, these people were mostly referring to the Covid-19 pandemic, which is killing Americans at an amazing rate. But subtextually, it wasn’t hard to read the TV special specifically as evening sighs of relief from various celebrities, and the regular people came in to introduce these celebrities. “Oh, thank God,” I can only assume that they exclaimed after that sigh. “Trump is no longer a president.”

I feel that sigh of relief deep in my bones. I do. Trump threatened so many things and so many people that are very important to me, and one of Biden’s first acts in the Oval Office was to sign an executive order to protect the employment rights of queer people across the country. This is not nothing! It will help so many of my dearest friends and loved ones! That’s great!

Yet there is also a vague and ubiquitous sense of fear felt by many of us who believe Trump is not a unique figure in American politics, but rather the figurehead of a massive, angry movement that won’t suddenly go away. That fear takes the shape of so many people who helped Biden win the presidency by stepping down, looking at the Trump years and saying, “Huh. That was weird. Thank god it’s over! “before they go about their lives.

The work of politics is long and excruciating and boring, and it requires constant, constant, constant advocacy for the country you want to see, not just the country you are currently living in. I am not accusing anyone of taking a break from this. We should all take breaks to rest, be with loved ones, and be human. And it is necessary to have hope: it is important to believe that the world is better than it is now, and these flames will only stay lit if you continue to feed them the tiny beauties of everyday life.

But in the meantime, it’s worth listening a little less to the parts of us that say, “Huh. That was weird! Thank god it’s over! “and listen more to those people who seem like they have barely held onto the edge of a cliff in the past four years.

In other words, we don’t just have to focus on the inauguration itself or a star-studded and totally enjoyable TV special, but also on the barbed wire that surrounds the Capitol so no one tries to storm it again. We need to focus on the National Guard forces that have firearms ready and ready. From one standpoint, America is a country that is undergoing yet another peaceful transfer of power. Seen from another, it’s a country that barely holds together. When the rituals of democracy are more important than democracy itself, it becomes too easy for democracy to undermine them.

America is a shared story shared by all citizens, hopefully heading towards the same goals. But the past four years have more than driven home the idea that we don’t all live in the same narrative. If you said goodbye to Celebrating America on Wednesday night, you may have seen Sean Hannity scold Hunter Biden’s laptop and its allegedly terrible contents.

The special was fine I guess (okay, it was mostly boring) but it seemed to exist mostly because it should exist. I am not convinced that by proceeding as if performing the right rituals would make America a matter of course, a common ideal that will prevail through whatever is thrown on it, a purpose, you can create unity who is also the means.

Behaving like America is a given, which is a smart idea in the short term because it helps Biden take power at a historically shaky time. It calms a people who have been through a lot. We feel sure we can bet on the country’s survival for at least the next four years, but then what? If we really untangle ourselves for what we seem to be, it will take a lot more than faith to turn things around.

America continues because it has existed as long as either of us lives, and because the alternative is too terrible and unthinkable. But it will likely have to change significantly – such as in ways that we may just be a little oblivious – to survive in its current form. So what is it Both? Neither?

At Vox, we want to answer your most important questions every day and provide you and our audiences around the world with information that empowers you through understanding. Vox’s work reaches more people than ever before, but our distinctive brand of explanatory journalism is consuming resources. Your financial contribution is not a donation, but it does allow our staff to continue offering free articles, videos, and podcasts to everyone who needs them. Please consider contributing to Vox today, starting at $ 3.

Jail guards interrupt Ghislaine Maxwell’s sleep each 15 minutes to see if she continues to be respiratory, the lawyer says

Inside 24 hours, Trump went from a near-concession to a false declare: “I received the election!”

Did Trump name US battle lifeless “losers” and “suckers”? The controversy, defined.