The 1st Congressional District in the eastern part of the state has been one of the liveliest seats in the country for years, but like the rest of the state, this time it was a friendly turf for Team Blue. The district bounced back from a tiny 50-49 lead for Barack Obama to an equally slim 48-47 victory for Trump four years ago in 2012, but Biden posted a relatively comfortable 52-46 lead.

The 1st was also particularly volatile in house races, although the Democrats have done better here in recent years. Democrat Carol Shea-Porter turned a shocker around in 2006, but lost her offer to Republican Frank Guinta for a third term during the 2010 red wave. Shea-Porter won it back from Guinta in 2012 when Obama carried the district, but Guinta returned to depose her in 2014. Shea-Porter returned, however once again in 2016 Guinta during their beating fourth Matchup, despite Trump’s small advantage.

However, this was the last time either Shea-Porter or Guinta would appear on the ballot. Shea-Porter decided to stop running in 2018 and his Democratic colleague Chris Pappas decisively won the competition to follow suit. Pappas, the first gay member of Congress, won re-election against Republican Matt Mowers 51-46 This year in a race that did not attract any serious outside expenditure.

The 2nd District in west and north New Hampshire is now traditionally more Democratic than the 1st District. Biden wore District 54-45, which was also a crucial shift to the left of Clinton’s 49-46 win.

The incumbent Republican Charlie Bass lost that seat in the blue wave in 2006 against the Democrat Paul Hodes, but won it narrowly against the Democrat Annie Kuster in 2010 after Hodes ran unsuccessfully for the Senate. However, Kuster defeated Bass in their 2012 rematch and held on decisively during the 2014 GOP wave. Sexton prevailed between 50 and 46 in 2016 against an underfunded Republican as Clinton carried her seat by a similar margin, but she had no issues in consecutive matchups with Republican Steve Negron in 2018 or 2020.

While the Granite State Democrats did well in the general election this year, the upcoming round of restructuring could cost them a seat. Not only was Republican Governor Chris Sununu decisively re-elected, the GOP also took control of the State House and Senate two years after losing both chambers.

The Republicans also controlled the restructuring process after the 2010 elections (due to their legislative superiority), but ironically, their success that year limited their ambitions. Both Guinta and Bass had just switched seats, and since there was no way for Republican card makers to prop up one congressman without injuring the other, they made only minor adjustments to the county lines. In-office protection is no longer an issue for Republicans this time around, however, so we could see more aggressive changes to a congressional map that has remained largely unchanged since 1881.

We’ll turn off next to Massachusetts, where the Republicans last won a house race in 1994. Biden took the Bay State 66-32, which was also a shift to the left of Clinton’s 61-33 win. Biden, like Clinton carried all nine congressional districts. (You can find a link to our map here.) 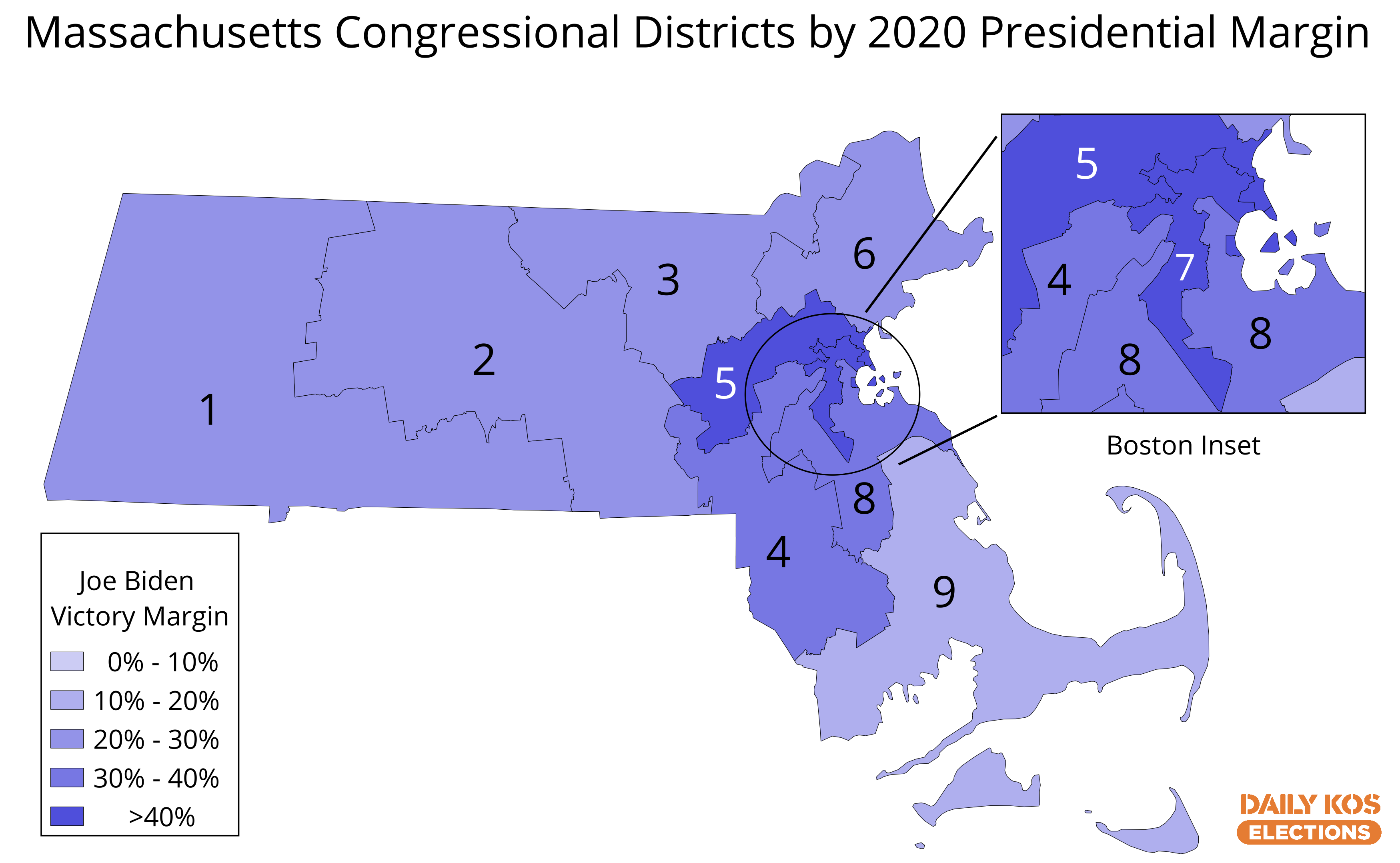 The only seat that Biden didn’t get 60% of the vote was in the 9th Ward on Cape Cod and the South Coast, but it still came close. Biden won 58-40 here, an improvement on Clinton’s 53-42 performance while Democratic MP Bill Keating won his sixth term 62-36. Biden’s best performance by far in the state was in Rep. Ayanna Pressley’s 7th district, a diverse constituency in the Boston area, which he took between 85 and 13.

The next round of restructuring should produce another cheap card for the Democrats. While Republican Governor Charlie Baker’s term will last until early 2023, the Democrats retained a majority in both houses of the Legislature, allowing them to override the governor’s vetoes.