Hazel Scott’s name is not a household one. When making lists of major Black pianists for this sub-series, I admit that I initially overlooked her. It’s amazing how political blacklisting really was like erasing the pages of history. I promised last week to cover some of the other jazz greats on piano today. However, dear readers, I am setting them aside for another Sunday; Scott’s story needs to be told in full.

This short mini doc, What Ever Happened to Hazel Scott, written and directed by filmmaker Eve Goldberg, tells the whole tale, opening with Scott playing “A Foggy Day” with her trio, bassist Charlie Mingus and drummer Rudy Nichols. It covers her early years, her rise to stardom, integration at the Café Society club, her marriage to Adam Clayton Powell Jr. and the cause of her downfall—blacklisting.

Born in Port of Spain, Trinidad on June 11, 1920, Hazel Dorothy Scott was the only child of R. Thomas Scott, a West African scholar from Liverpool, England and Alma Long Scott, a classically-trained pianist and music teacher. A precocious child who discovered the piano at the age of 3, Hazel surprised everyone with her ability to play by ear. When she would scream with displeasure after one of Alma’s students hit a wrong note, no one in the household recognized the sensitive ear she possessed. “They had been amused, but no one regarded my urge as latent talent,” she recalled. Until one day, young Hazel made her way to the piano and began tapping out the church hymn, “Gentle Jesus”, a tune her grandmother Margaret sang to her daily at nap time. From that moment on, Alma shifted her focus from her own dreams of becoming a concert pianist, and dedicated herself to cultivating her daughter’s natural gift. They were a tight knit pair, sharing an extremely close bond throughout their lives. “She was the single biggest influence in my life,” Hazel said. Her father, on the other hand, would soon leave the family and have a very small presence in his daughter’s life. (…)

She taught herself the saxophone, and eventually joined Lil Hardin Armstrong’s orchestra in the early 1930s. Alma’s associations with well-known musicians made the Scott household “a mecca for musicians,” according to Hazel, who benefited from the guidance and tutelage of jazz greats Art Tatum, Lester Young and Fats Waller, all of whom she considered to be like family.

In 1928, Hazel auditioned for enrollment in the prestigious Juilliard School of Music. She was only eight-years-old, and too young for standard enrollment (students had to be at least 16), but because of some influential nudging by wealthy family friends and Alma’s sheer determination, Hazel was given a chance. Her performance of Rachmaninoff’s “Prelude in C-Sharp Minor” made a strong impression on staff professor Oscar Wagner. He proclaimed the child “a genius,” and with the permission of the school’s director, Walter Damrosch, offered her a special scholarship where he would teach her privately.

As Scott began to gain fame in jazz circles, she never gave up her early classical training. Here she is performing “Hungarian Rhapsody No. 2” by Franz Liszt, for World War II soldiers, and then segueing into jazz.

Chilton’s biography of Scott is a must read, not just for jazz fans, but also for those of you who are interested in issues of state repression and blacklisting, combined with the toxicity of racism. 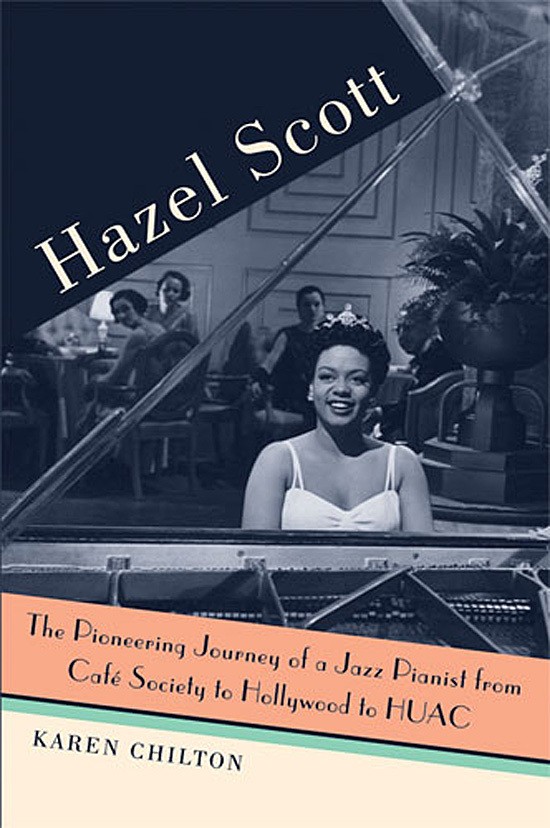 Scott’s musical talent was cultivated by her musician mother, Alma Long Scott as well as several great jazz luminaries of the period, namely, Art Tatum, Fats Waller, Billie Holiday and Lester Young. Career success was swift for the young pianist—she auditioned at the prestigious Juilliard School when she was only eight years old, hosted her own radio show, and shared the bill at Roseland Ballroom with the Count Basie Orchestra at fifteen. After several stand-out performances on Broadway, it was the opening of New York’s first integrated nightclub, Café Society, that made Hazel Scott a star. Still a teenager, the “Darling of Café Society” wowed audiences with her swing renditions of classical masterpieces by Chopin, Bach, and Rachmaninoff. By the time Hollywood came calling, Scott had achieved such stature that she could successfully challenge the studios’ deplorable treatment of black actors. She would later become one of the first black women to host her own television show. During the 1940s and 50s, her sexy and vivacious presence captivated fans worldwide, while her marriage to the controversial black Congressman from Harlem, Adam Clayton Powell, Jr., kept her constantly in the headlines.

In a career spanning over four decades, Hazel Scott became known not only for her accomplishments on stage and screen, but for her outspoken advocacy of civil rights and her refusal to play before segregated audiences. Her relentless crusade on behalf of African Americans, women, and artists made her the target of the House Un-American Activities Committee (HUAC) during the McCarthy Era, eventually forcing her to join the black expatriate community in Paris. By age twenty-five, Hazel Scott was an international star. Before reaching thirty-five, however, she considered herself a failure. Plagued by insecurity and depression, she twice tried to take her own life. Though she was once one of the most sought-after talents in show business, Scott would return to America, after years of living abroad, to a music world that no longer valued what she had to offer.

In 1950, right-wing journal Red Channels put out a list of actors, musicians and others in entertainment industry suspected of being Communist sympathizers. The list included Leonard Bernstein, Orson Wells and Hazel Scott. It was common during the post-Cold War, McCarthy era for artists to be blacklisted from future employment if suspected of being ‘subversives’ of any sort – even if in Hazel’s case, she was not accused of any actual support of the Soviets. Fearful, Hazel volunteered to testify before the House Un-American Activities. She denied being a communist, but strongly criticized the blacklisting process.

Her speech ended with an impassioned request to the committee to “protect those Americans who have honestly, wholesomely, and unselfishly tried to perfect this country”, concluding: “The actors, musicians, artists, composers, and all of the men and women of the arts are eager and anxious to help, to serve. Our country needs us more today than ever before. We should not be written off by the vicious slanders of little and petty men.”

Hazel’s speech made the headlines. A week later, her talk show was cancelled – and concert bookings took a nosedive.

Blacklisted, she moved to Paris and performed exclusively in Europe until the mid-sixties. As with many an artist who suffered this fate during the Cold War, Scott stood accused of anti-Americanism not for any actual support of the Soviets but because she challenged racial segregation and discrimination at home.

When Scott left the U.S., and settled in Paris, she found a community of ex-pats there, among them James Baldwin. For the anniversary of her 100th birthday this year, there were quite a few posts on Twitter, including one of her at a protest in front of the U.S. Embassy, in unity with the March on Washington back in the States.

She was living in Paris at the time of the March on Washington in 1963, so she rocked up at the US Embassy with a bunch of fellow ex-pats in solidarity with those at home.

Those with keen ears might have noticed that during Alicia Keys’ beguiling Grammy Awards performance, which she began sitting side-saddle between two pianos to play Scott Joplin’s “Maple Leaf Rag,” she mentioned Hazel Scott.

With that brief shout out, Keys acknowledged an expert pianist who made a career out of the maneuver, an entertainer and movie star whose accomplishments made her a household name during her prime.

Keys admits that “I just want to give a shout out to Hazel Scott, because I always wanted to play two pianos.”

Here’s Scott at her famous two pianos, in a scene from the 1943 Hollywood film The Heat’s On, which starred Mae West; Scott played herself.

Scott’s virtuosity as a jazz pianist is most evident in her trio work, as you can hear in this 1955 recording, with Charlie Mingus on bass and Max Roach on drums.

Since I did renege on my promise of Thelonious Monk today, I’ll play us out with Scott’s version of his jazz standard, “Round Midnight.”

I’m hoping that Hazel Scott’s name and legacy will be obscured no more.

If you are early voting, and headed to the polls, why not make and take a Hazel Scott playlist with you to pass the time on those long lines?

I’ll see you next Sunday, with Thelonious Monk and more!

The election is days away, but it’s not too late to donate to our slate of Democrats as we race toward Nov. 3. Will you chip in $3 or more to help candidates over the finish line?