Fifty-seven years after Martin Luther King Jr. spoke at the 1963 March on Washington, thousands of protesters for racial justice again gathered on the National Mall in Washington, DC. It was an emotional day of protesting against police violence, the culmination of a summer of nationwide protests in the wake of George Floyd’s death.

12-year-old Yolanda Renee King, the granddaughter of Rev. Martin Luther King Jr., speaks from the spot where her grandfather delivered his “I Have a Dream” speech 57 years ago at the Lincoln Memorial.Jonathan Ernst-Pool/Getty Images

Rev. Al Sharpton, who first announced the “Get Your Knee Off Our Necks” March at Floyd’s funeral in June, spoke from the steps of the Lincoln Memorial, alongside the families of Black people who have been killed by police in recent memory.

“For too long, you acted like we didn’t matter,” Sharpton told the crowd. “They say, ‘Well, everybody matters.’ But everybody hasn’t mattered the same in America. The reason we had and we still have to say ‘Black Lives Matter’ is because we get less health care, like we don’t matter. We go to jail longer for the same crimes, like we don’t matter . . . Black lives matter, and we won’t stop until it matters to everybody.”

Floyd’s sister, Bridgett Floyd also addressed march-goers, asking them to carry on the legacy her brother created in death. “My brother cannot be a voice today,” Floyd said. “We have to be that voice, we have to be that change.” 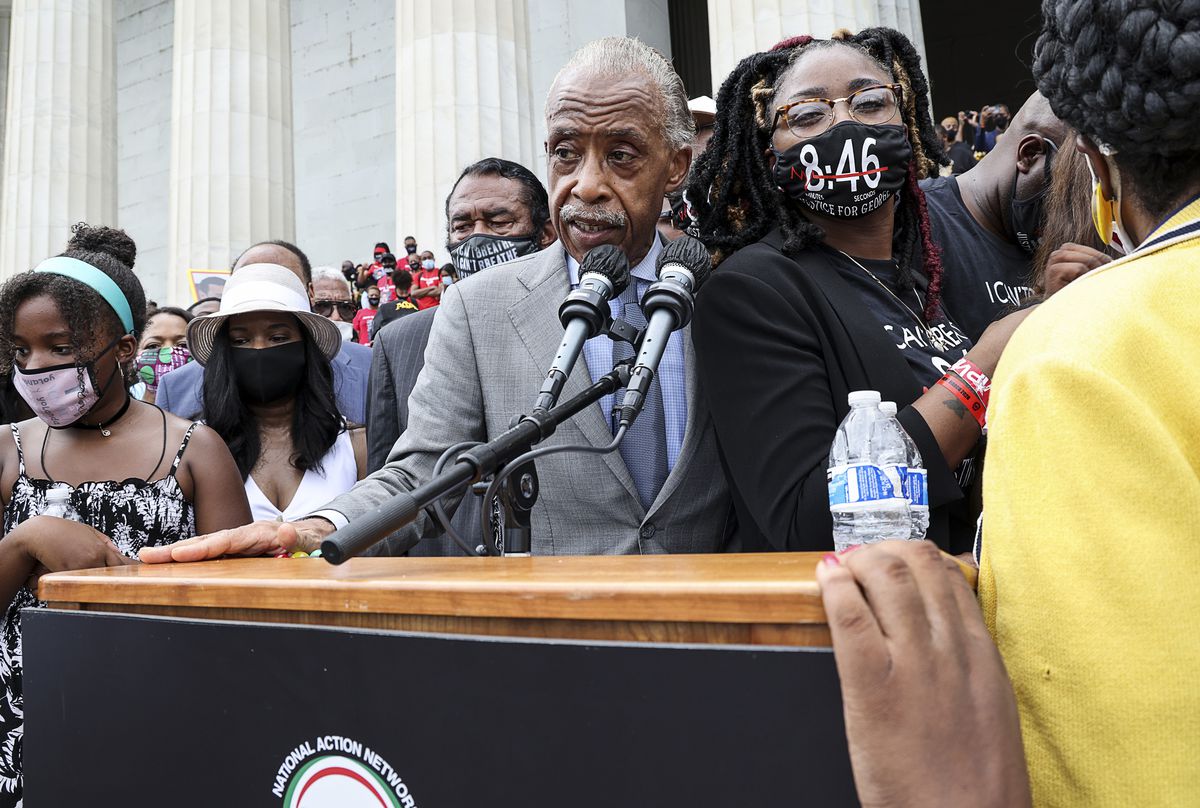 Bridgett Floyd, the sister of George Floyd, who was killed in police custody in Minneapolis, is flanked by Rev. Al Sharpton, one of the organizers of Friday’s march. Floyd asked America to consider “Would your future generations remember you for your complacency, your inaction, or would they remember you for your empathy, your leadership, your passion for weeding out the injustices and evil in the world?”Jonathan Ernst-Pool/Getty Images 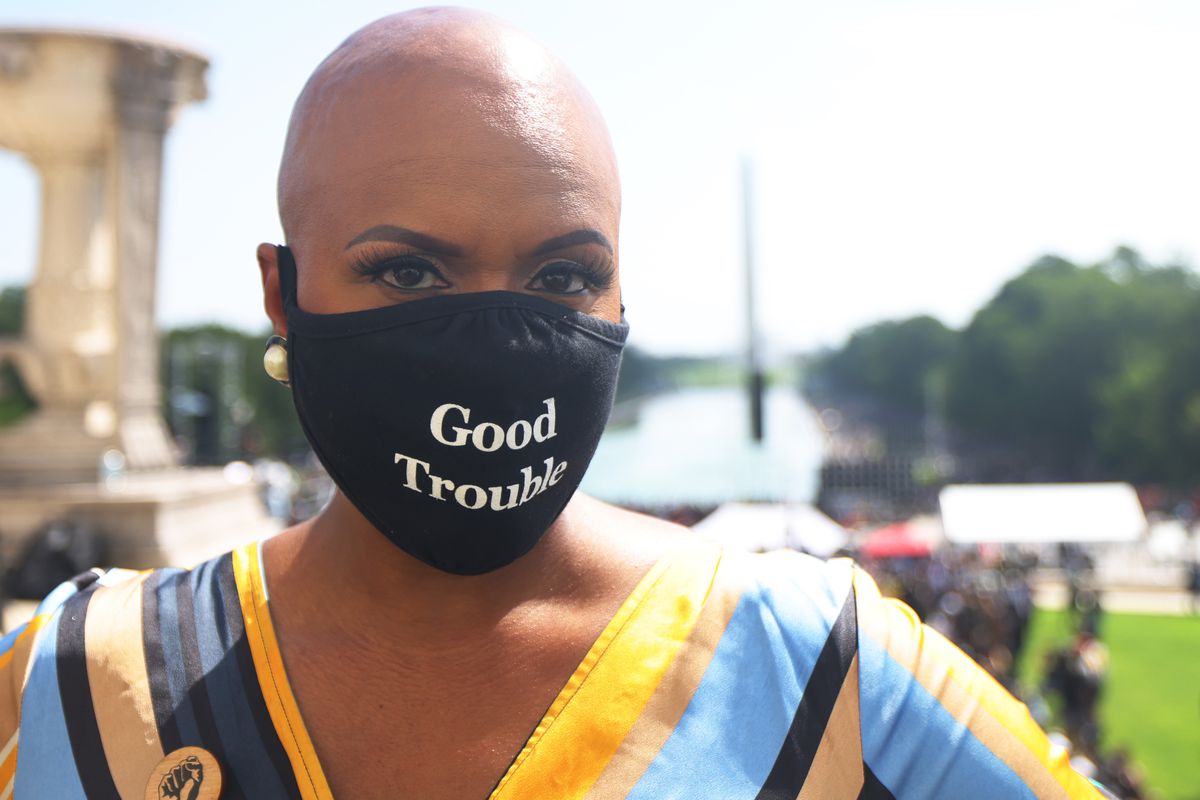 The march was planned before 29-year-old Jacob Blake was shot seven times in the back by police in Kenosha, Wisconsin, triggering another round of mass protests. Blake’s father, Jacob Blake, Sr. told the Washington crowd that they were holding court over racism in America, pronouncing it “guilty, guilty, guilty.” Other speakers drove home the need to vote this November.

Breanna Taylor’s mother, Tamika Palmer, thanked those who are working towards justice for her daughter’s death after being shot by Louisville, Kentucky, police in a no-knock raid. “What we need is change,” Palmer said. “And we are at a point where we can get that change, but we have to stand together, we have to vote.” 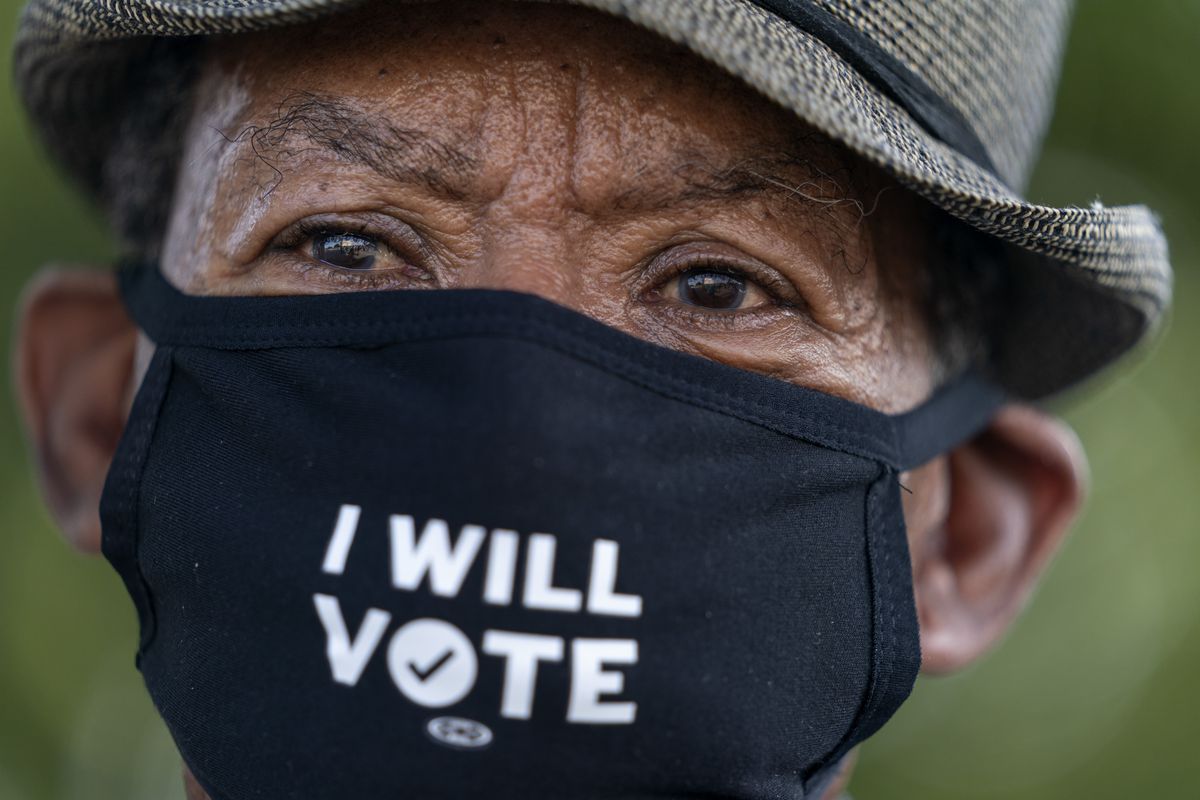 Organizers took care to prevent spread of Covid-19, mandating that attendees wear a mask and doing temperature checks for anyone entering the protest area around the National Mall. 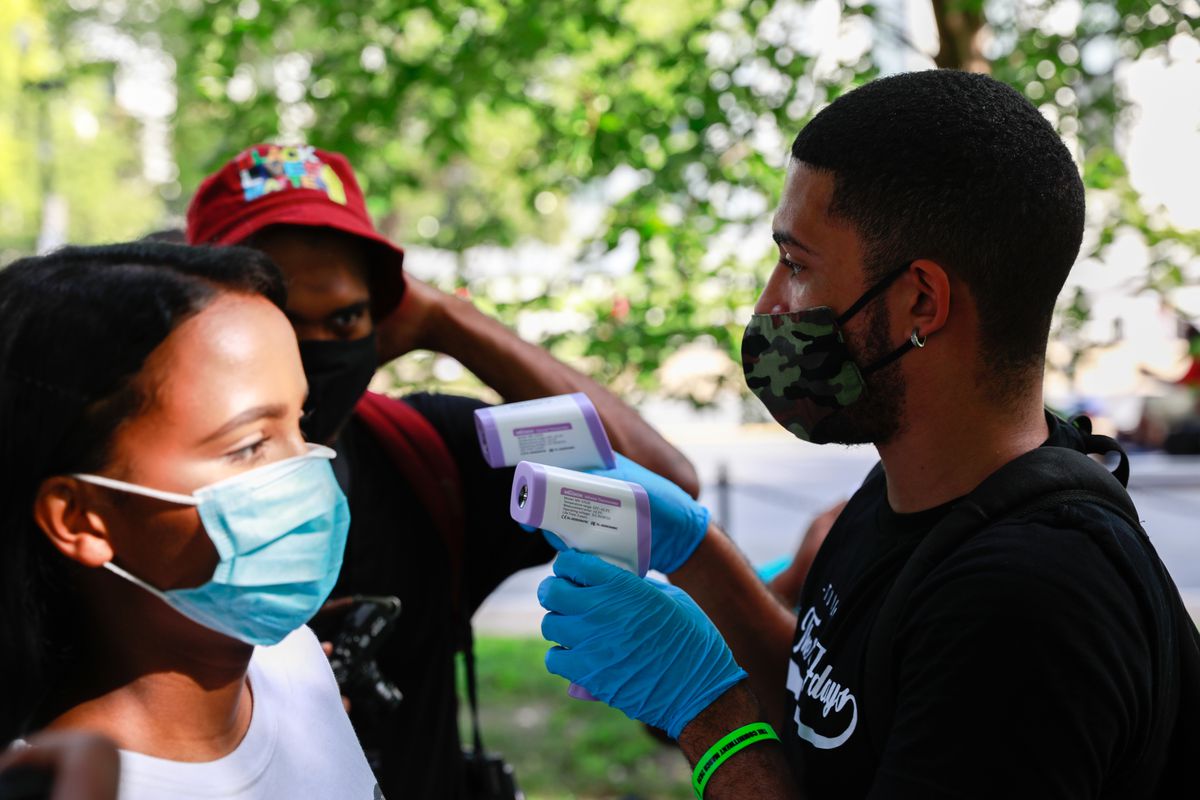 People have their temperature checked before entry to the March on Washington.Natasha Moustache/Getty Images

But the urgency of the moment pulled such a massive crowd that thousands of protesters filled the area outside the temperature checks, and it became harder to socially distance within the protest area itself as the afternoon progressed. 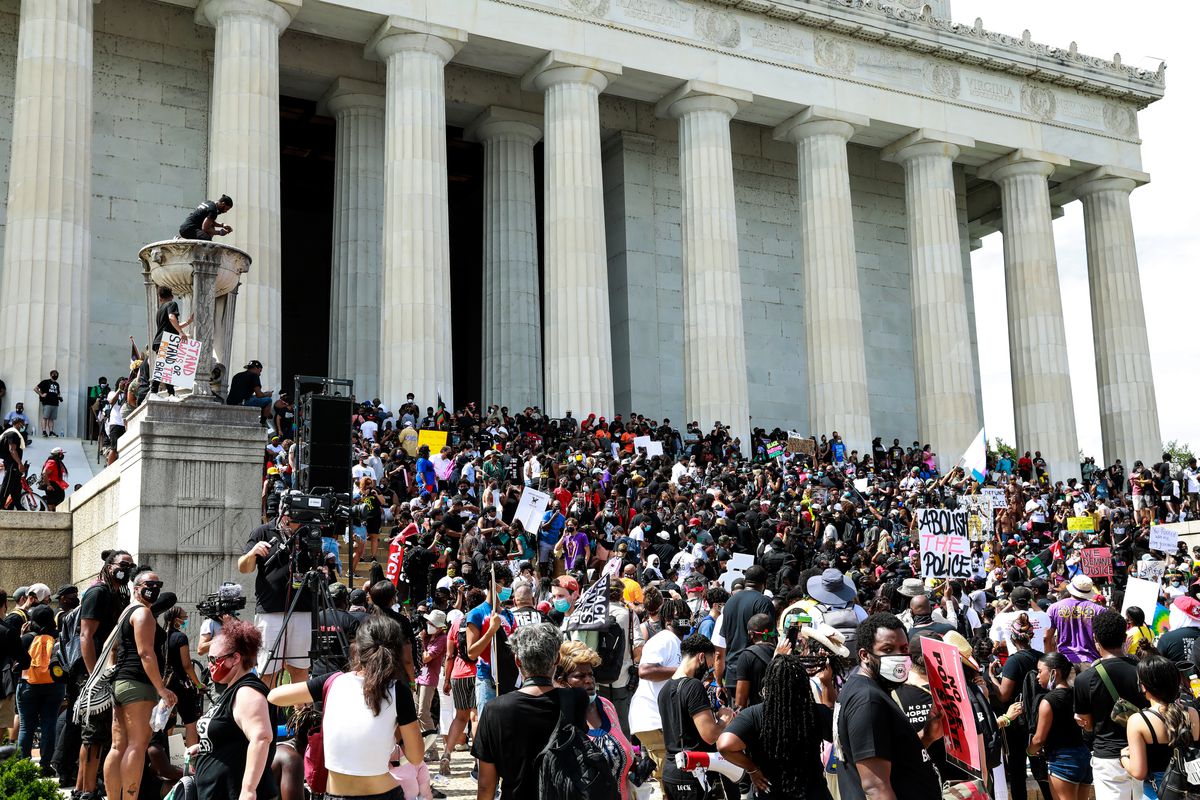 Crowds descend upon the steps of the Lincoln Memorial during the Commitment March.Natasha Moustache/Getty Images 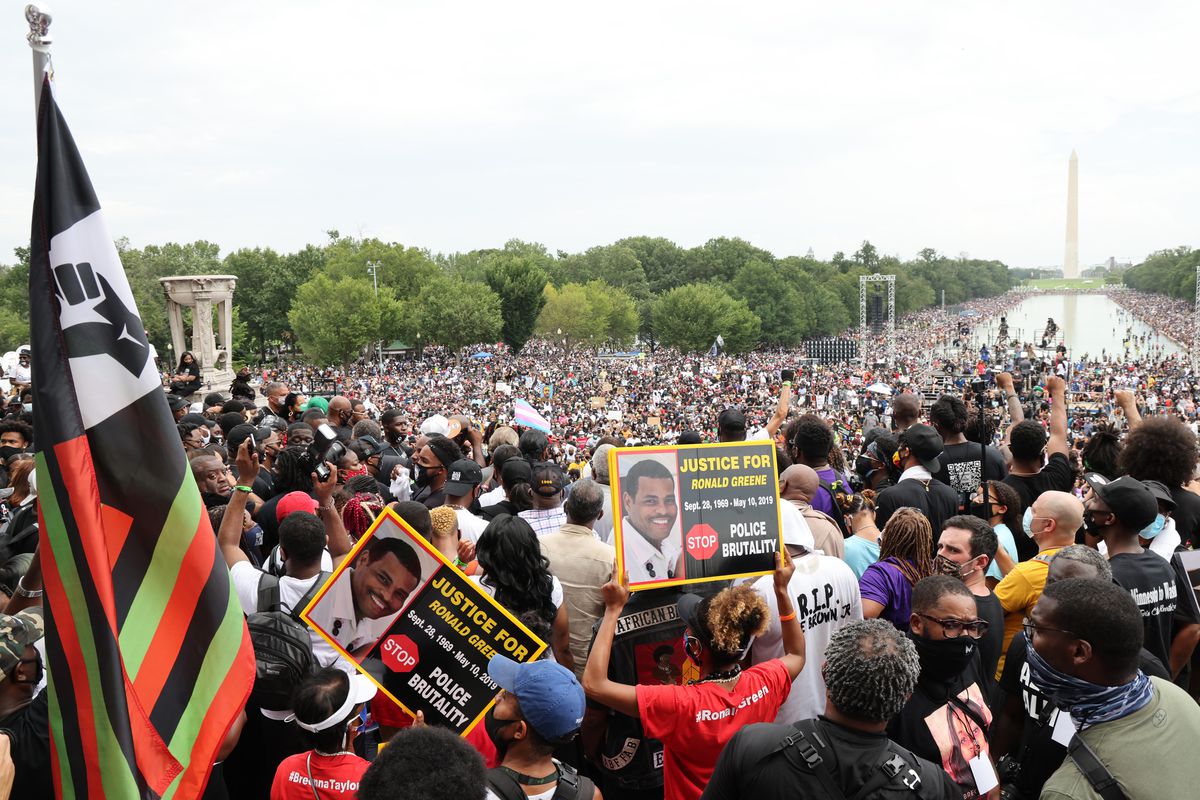 Demonstrators gather at the Lincoln Memorial and along the Reflecting Pool.Jonathan Ernst-Pool/Getty Images

Temperatures in the 90s didn’t seem to deter the crowds either, with many protesters wading into the reflecting pool to help cool off. 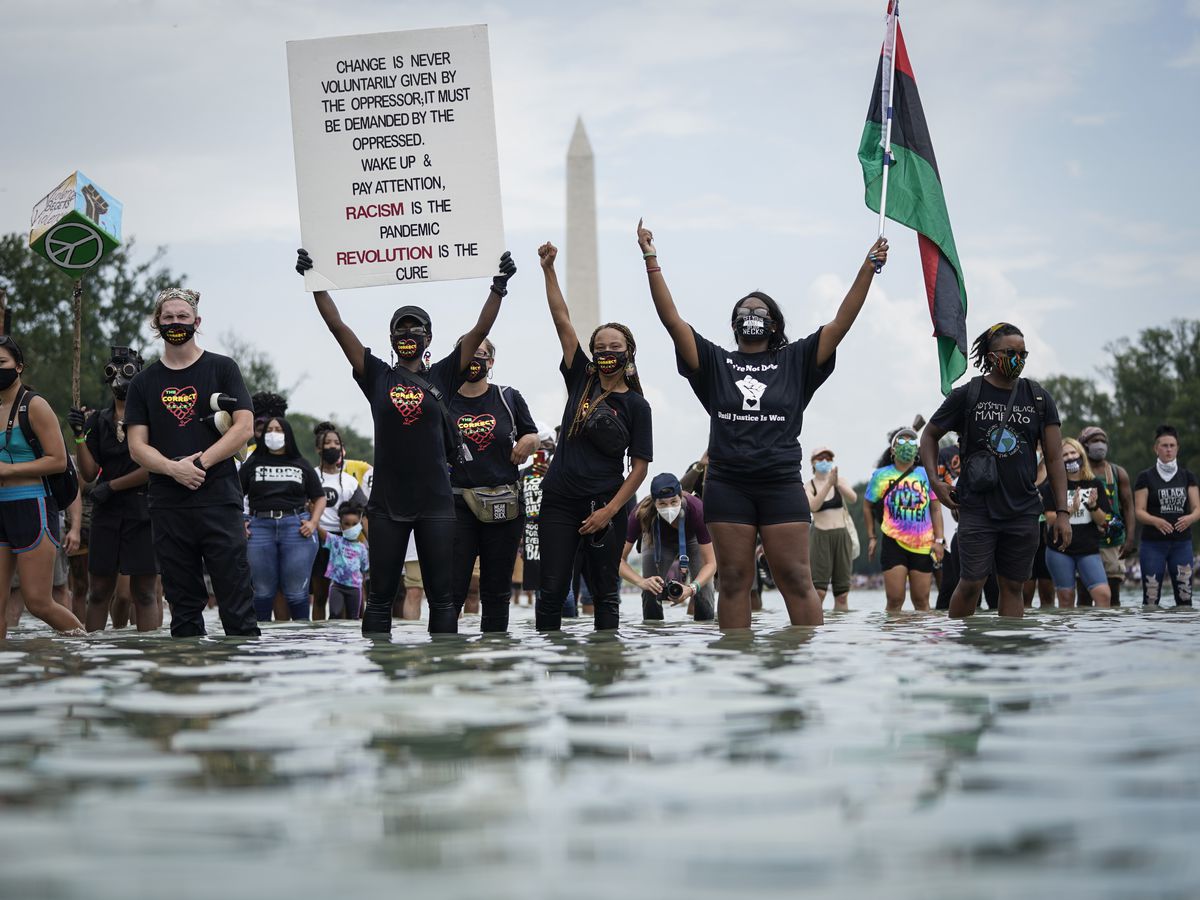 Attendees stand in the reflecting pool near the Lincoln Memorial, one of them holding a sign roughly quoting Martin Luther King Jr.’s “Letter from a Birmingham Jail.”Drew Angerer/Getty Images

The march sought to renew the legacy of Martin Luther King, Jr.’s iconic “I have a dream” speech from 1963, which he gave in front of 250,000 demonstrators. That march eventually led to the Civil Rights Act, a sweeping set of laws banning discrimination on the basis of race, religion, sex, and national origin across areas of public life, like housing, employment, and public accommodations.

Whether the 2020 version achieves substantial legislative change remains to be seen. 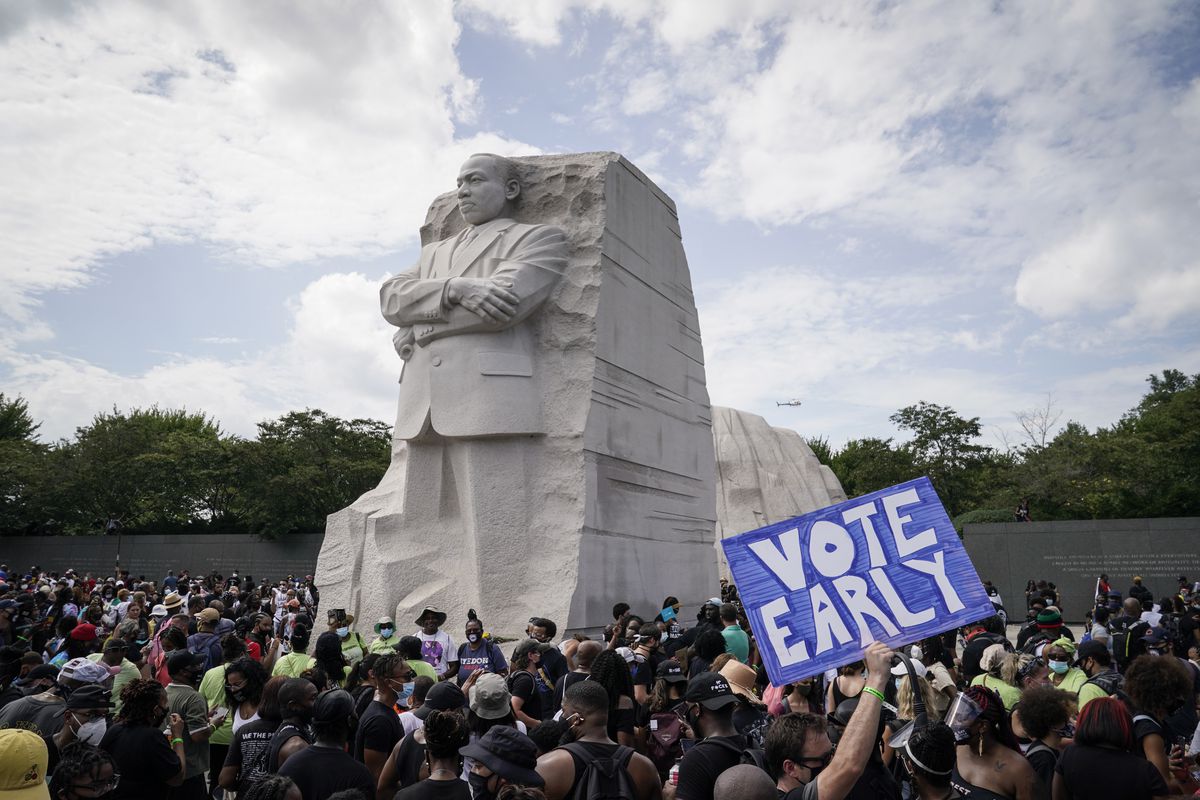 Participants in the March on Washington conclude their march from the Lincoln Memorial to the Martin Luther King Jr. Memorial August 28, 2020 in Washington, DC. Drew Angerer/Getty Images 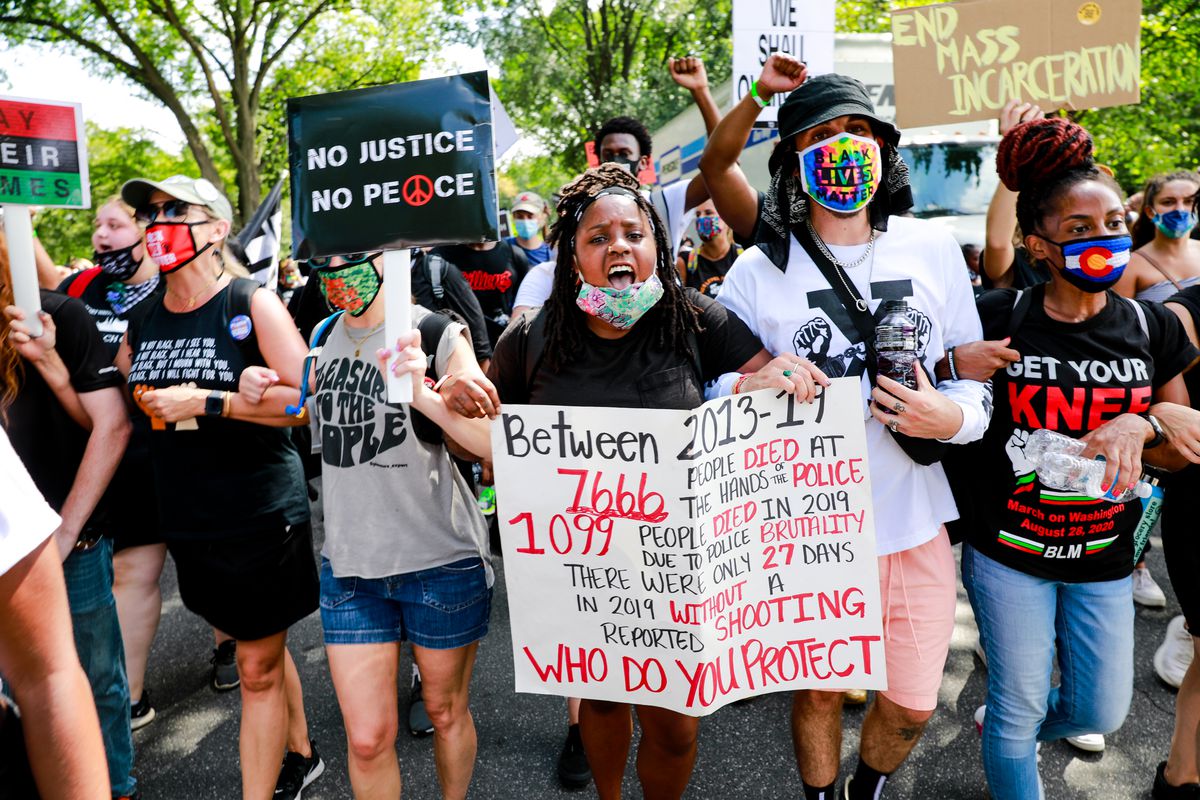 Protesters take to the streets after the programming on the Lincoln Memorial.Natasha Moustache/Getty Images 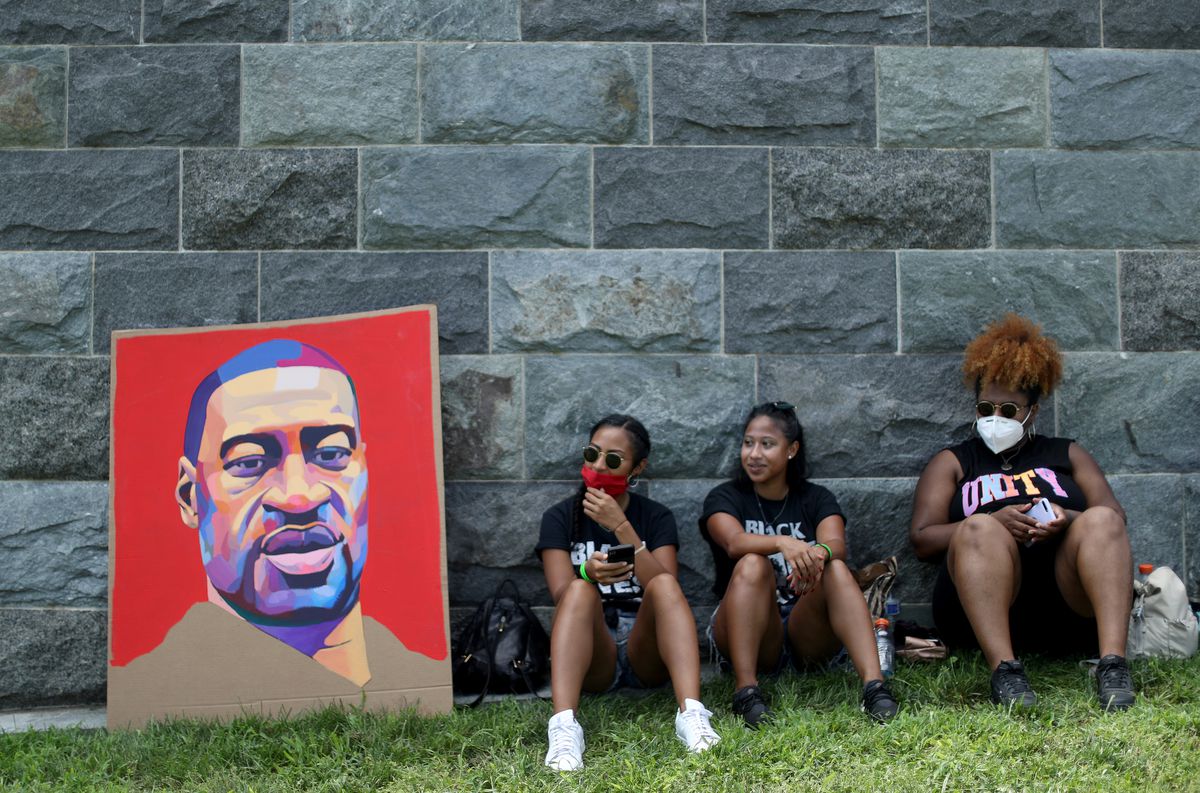 Alyanna Camacho (L) waits with Laura Navarrete (C) and Brianna Barrett (R) next to signs of George Floyd that Camacho made while on their way to the March on Washington at the Lincoln Memorial as businesses are boarded up.Chip Somodevilla/Getty Images 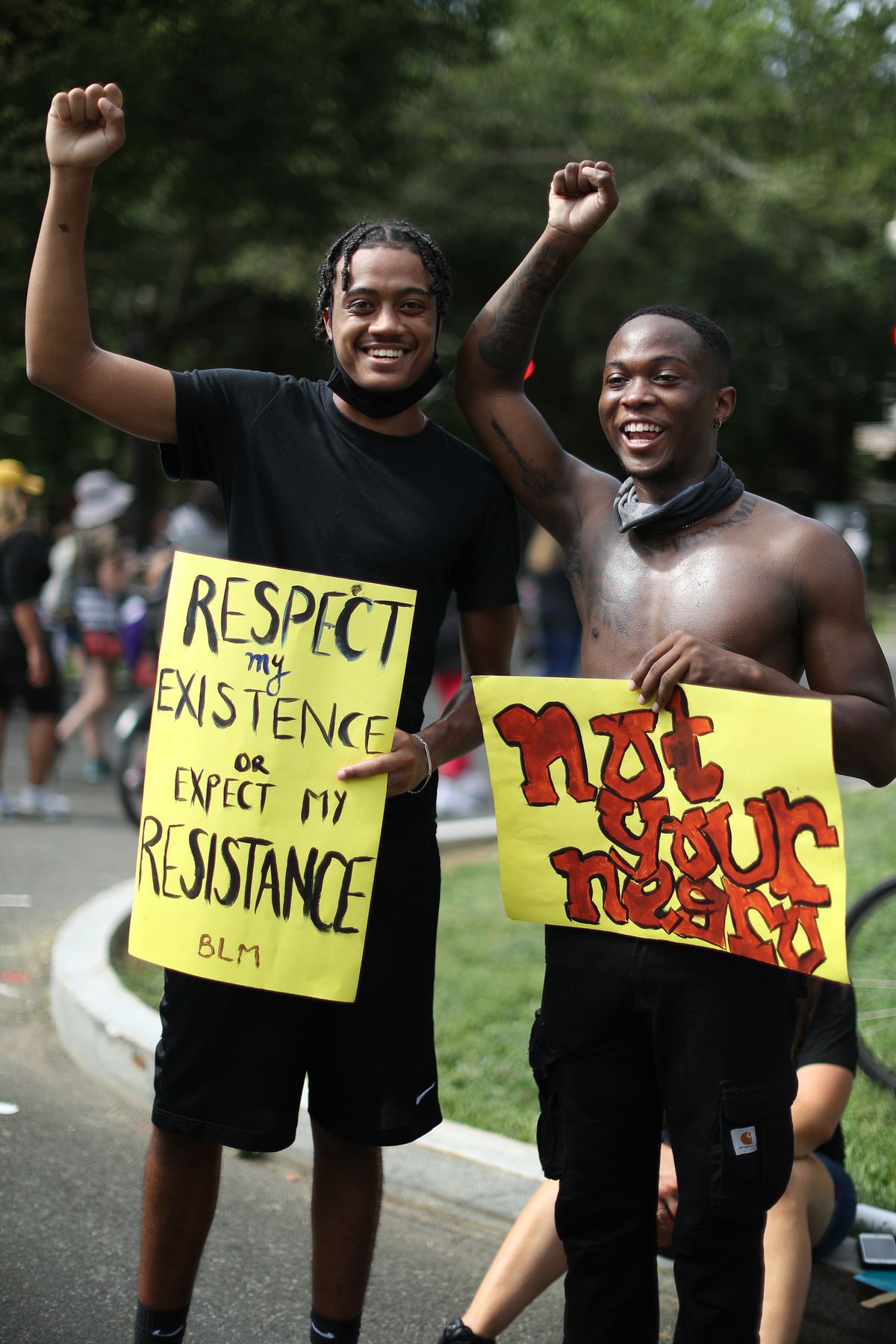 Two men pose for a photograph while marching from the Lincoln Memorial to the Martin Luther King Jr. Memorial.Chip Somodevilla/Getty Images

Potential Cuomo challenger Rep. Tom Reed is being charged with sexual misconduct by a former lobbyist