In theory, the president presiding over a naturalization ceremony should be a good thing: a way of signaling that our country is open to immigrants. But when President Trump did it during Tuesday’s Republican National Convention events, it felt like exploitation.

It wasn’t just the hypocrisy, the fact that Trump put on that display despite being the president most hostile to immigration, legal or otherwise, in modern history. It wasn’t even just the ethics of the thing, what appeared to be a blatant violation of the law prohibiting federal employees from engaging in electioneering.

At root, it was the way in which real live human beings — five people, new Americans achieving something they’ve wanted for years — participating in what should be a moving and deeply personal ritual, were reduced to bit players in a very special episode of the Trump show. They were being deployed for a specific purpose: to pull the wool over America’s eyes about who Donald Trump is. The scene was meant to reassure: Trump isn’t a xenophobe; look at these immigrants he’s welcoming — people of color to boot!

President Trump hosts a naturalization ceremony for new citizens in a pre-recorded video broadcast during the virtual convention.Republican National Committee via Getty Images

It was pure exploitation for a mendacious political production. And there have been other scenes like it — of the RNC using people and places as mere props for the Trump show — throughout the convention.

The problem isn’t that the RNC featured regular people. Every convention, including last week’s DNC, features stories of non-political figures who have been helped by the candidate or find them inspiring.

No, this is something different: the conscription of civic rituals and functions of state, things that should be nonpartisan and deeply meaningful for everyone, for purely political purposes. It epitomizes the way that Trump sees the presidency as primarily an exercise in image-making and ego-boosting — and treats Americans less as citizens than contestants or cameos on Trump’s long-running reality TV extravaganza.

How the reality TV presidency is warping our politics

It feels like forever ago, but back in February, President Trump delivered a State of the Union speech that featured one particularly notable and surprising moment: right-wing shock jock Rush Limbaugh receiving the Presidential Medal of Freedom on live television.

As with most things Trump, the highest purpose here was to own the libs. Limbaugh is a particularly offensive broadcaster — he once referred to the last president as “Barack the Magic Negro” — so giving him America’s highest civilian honor was bound to trigger all of the right people.

But what’s notable here isn’t just the content, but the format. The State of the Union is a fulfillment of constitutional duty, the only speech the president regularly gives to both chambers of Congress in the Capitol building. In reality, the State of the Union has always been infused with politics. But there have been limits as to what’s done; even in our heated partisan times, presidents treated it as an opportunity to speak to all Americans, not just the ones who voted for the incumbent.

Elevating Limbaugh in that way wasn’t just another signpost of the GOP’s descent into pure resentment politics — it also marked a low point for a traditionally sober and high-minded event. Congress became a campaign stop, just another venue for rallying the base and dividing the country.

And it wasn’t the only thing Trump did in this convention in the name of political showmanship. 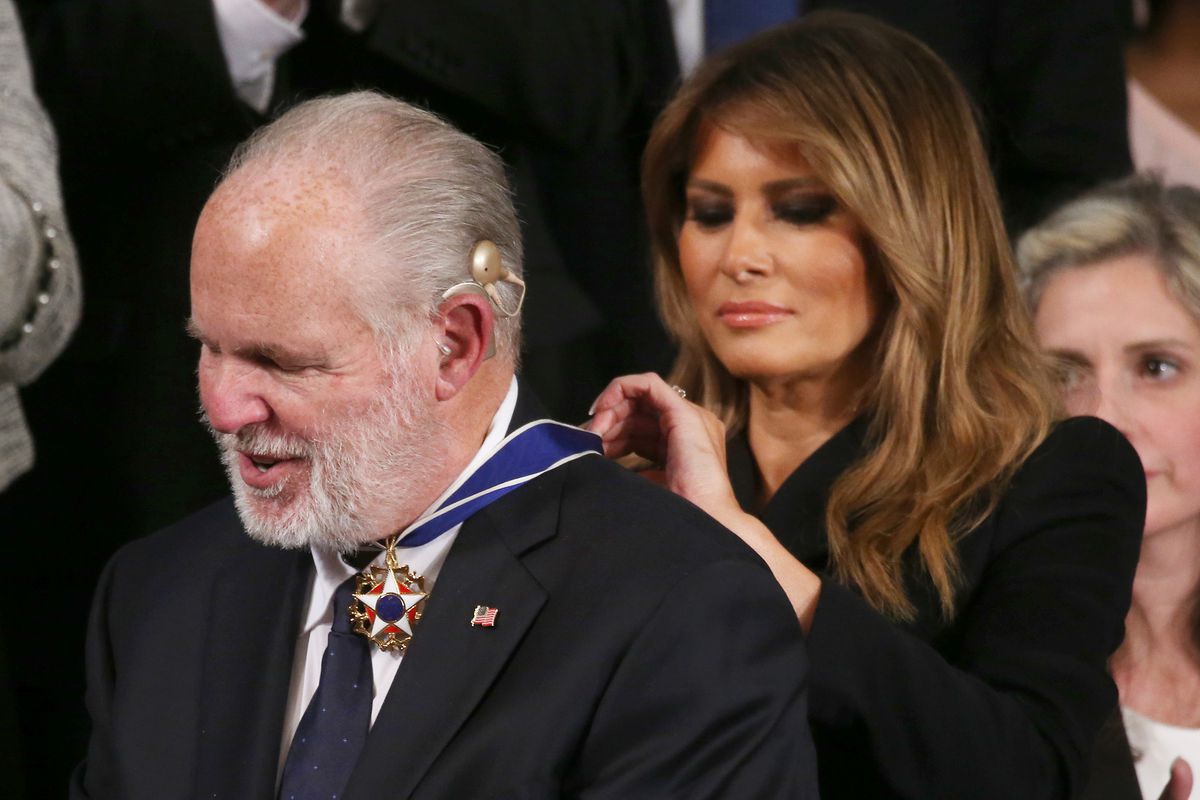 Rush Limbaugh receiving the Presidential Medal of Freedom at the 2020 State of the Union.Mario Tama/Getty Images

During the speech, the president highlighted Amy Williams, a guest at the speech whose Army husband had been deployed to Afghanistan. He then revealed a surprise: her husband, Sgt. First Class Townsend Williams, had been brought back home. The whole country watched as the two were reunited.

There wasn’t anything wrong with bringing the Williamses together, any more than there was anything wrong with naturalizing these five new American citizens. What rankled was the way that the genuine emotion of real people was transmuted into a Trump campaign ad. These moments all but turned network cameras into a Bravo film crew working for the Great America PAC.

Similarly, at the RNC, Trump chose to pardon Jon Ponder — a felon turned activist helping convicts get jobs. Pardoning Ponder, who appears to be a genuinely admirable person, seems like the right thing to do. But the fact is whether it was the right thing to do or not isn’t what this White House is really thinking about. To their mind, it was good TV that made the president look good.

By broadcasting it, Trump debased a good act. He made Ponder into a political prop, the pardon ceremony into the climax of a reality TV show episode. These ordinary Americans became secondary to their own narratives.

The story was really about Trump’s personal greatness and munificence — covering for everything that he’s done to hurt the country in general, and African Americans and immigrants in particular.

All the world’s a stage

Nor is it just Americans treated this way. Secretary of State Mike Pompeo, in flagrant violation of electioneering rules that he himself just issued, made the case for Trump’s foreign policy record from Jerusalem — the Old City, home to the Western Wall and Dome of the Rock, in the background.

At first glance, this might not seem like the same sort of thing as the naturalization and pardon ceremonies. Incumbent Cabinet-level secretaries have spoken at party conventions before; why does it matter that Pompeo is doing so while on a business trip?

The answer is that, for a secretary of state, “a business trip” is actually diplomacy on behalf of the United States. The politics of the Middle East are in flux; Pompeo is in Israel, in part, to help broker and smooth the country’s negotiations with nearby Arab and Muslim states. Pompeo’s decision to so nakedly conscript this significant diplomatic trip into a political narrative, to use some of the Abrahamic world’s holiest sites as a backdrop for pro-Trump electioneering, shows how thoroughly the interests of the United States have been linked to the interests of the Trump presidency.

The Jerusalem backdrop told a story to evangelical voters: that Trump moved the US embassy to Jerusalem and shares your hardline view of the conflict. But in the process, real Israelis and Palestinians were flattened in service of reminding Trump-supporting Christians that they’re getting what they wanted from him.

It was “Israel not as a real country but as fantasyland, backdrop for Christian myth,” the Israeli journalist Gershom Gorenberg writes. “We who live here are not people; we are hobbits or orcs, extras in crowd scenes of their story.” 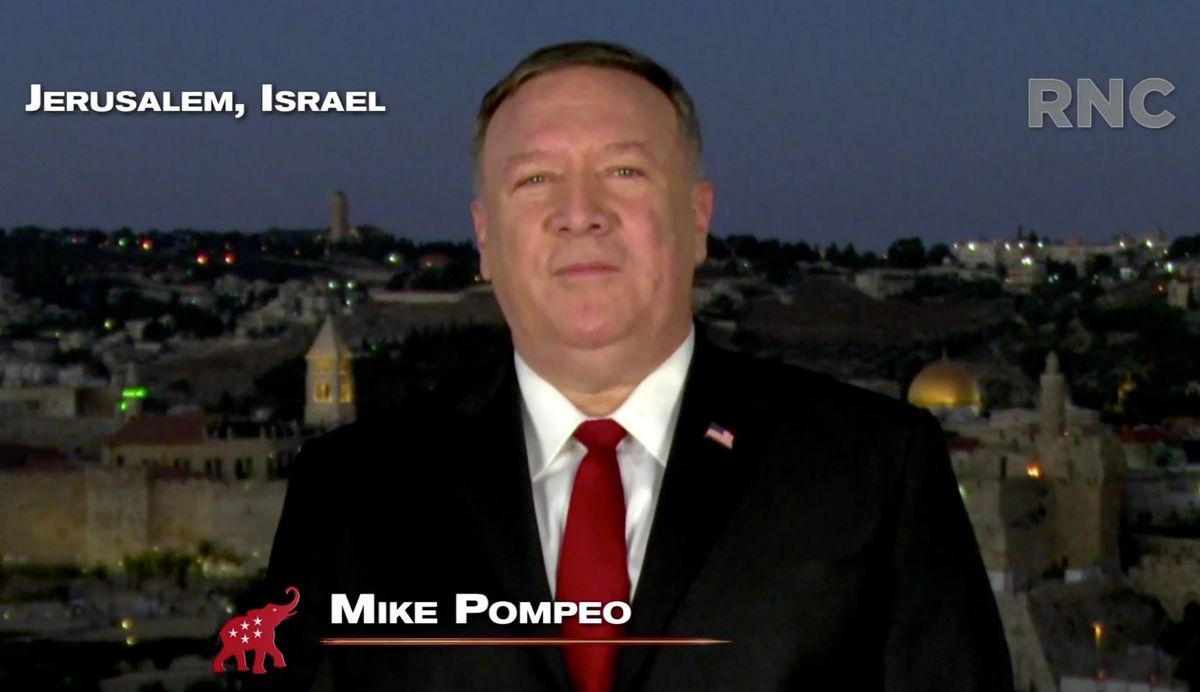 Melania’s speech, one of the least objectionable on substantive grounds, had a similar optics problem. Delivered from the White House’s Rose Garden, the first lady enlisted the solemnity and the dignity of the White House for campaign purposes. This is ours, the staging of the speech said — the Hatch Act be damned.

Now it’s possible that, as with the Limbaugh medal, the RNC’s crass showmanship is designed, first and foremost, to make people like me angry — to get “the media” to highlight some actual good things that Trump has done, like Ponder’s pardon, and make his critics sound unhinged in the process.

“He’s going to get them to attack him for pardoning a black ex-felon & naturalizing five immigrants of color on primetime television,” as the conservative journalist Guy Benson put it.

But this kind of thinking is exactly the problem. The fact that Trump adequately performed functions of his job — pardoning someone who deserves it, welcoming new immigrants into the country — doesn’t mean that it’s right for him to do so in a way that turns the entire thing into the Trump Show.

But it’s worse than that. If we allow everything to be turned into politics, if we refuse to maintain that it’s wrong for the president to treat the state as merely a means to score political points, we become complicit in the whitewashing of Trump’s record.

While presidents have always used people as props to a degree, Trump has taken that trope and turned it up many notches. And he has done so with the express purpose of making his record out to be something it’s not — to make Mr. “Shithole Countries” seem like a friend of immigrants, to make the leader who referred to neo-Nazis as “very fine people” seem like a friend of the Black community. These exercises in performative empathy work to erase the cruelty Trump has displayed routinely during his presidency and normalize his twisting of the nonpartisan tools of state into tools of his reelection campaign.

Many observers have noted that the RNC has been devoid of policy ideas and political vision beyond veneration of Trump as a person. The use of people as props reveals the deep logic that underpins that: that Trump sees himself, and not any set of ideals or values or civic obligations, as the purpose of his presidency. If you are not Donald Trump, you can be used by him as seen fit.

Five immigrants have just become Americans and Jon Ponder has been pardoned — all to the good. But their TV appearance wasn’t about them. It was about him. It always is.

In the spring, we launched a program asking readers for financial contributions to help keep Vox free for everyone, and last week, we set a goal of reaching 20,000 contributors. Well, you helped us blow past that. Today, we are extending that goal to 25,000. Millions turn to Vox each month to understand an increasingly chaotic world — from what is happening with the USPS to the coronavirus crisis to what is, quite possibly, the most consequential presidential election of our lifetimes. Even when the economy and the news advertising market recovers, your support will be a critical part of sustaining our resource-intensive work — and helping everyone make sense of an increasingly chaotic world. Contribute today from as little as $3.

Trump is not going to go to the inauguration of Biden, the president introduced two days after the lethal rebellion within the US Capitol