Right now, Tropical Storm Lara is churning along east of Dominica and Martinique with top winds at 45 miles per hour. It seems improbable given its current location, but that storm is expected to skim just north of Puerto Rico and Cuba, entering the Gulf on Sunday evening as it grows into a Category 1 hurricane.

Meanwhile, the still-unnamed tropical depression 14 formed in a completely different area off the coast of Honduras, but it is expected to gather strength and move north. The level of sustained winds were at 35 miles per hour on Friday morning, but are likely to earn the storm a name by the afternoon. If current projections hold, it will pass between the Yucatan Peninsula and Cuba on Saturday, entering the Gulf as a tropical storm and rapidly growing toward hurricane strength. However, projections are that almost as soon as it passes the border into hurricane, it will falter and reach the coast with winds that are tropical storm strength.

The result of the two projections would have 14—which is very likely to get the name “Marco”—coming ashore near the Texas-Louisiana border some time on Tuesday. Meanwhile, Lara will strike to the east, somewhere near Mississippi or Alabama, on Wednesday morning. The combined storms present the possibility of bringing tropical storm-force winds across the entire Gulf, along with a considerable threat of flooding due to storm surge and heavy rains.

The combined storms represent a threat to the entire Gulf region.

Though Lara represents a threat to Puerto Rico, it is likely that the storm will not gain hurricane strength until around the time it passes the Florida Keys and enters the very warm waters of the Gulf. So while both Puerto Rico and Cuba, as well as many smaller islands, could take a direct blow from the storm, it’s unlikely to deliver the kind of damage seen with recent severe storms. 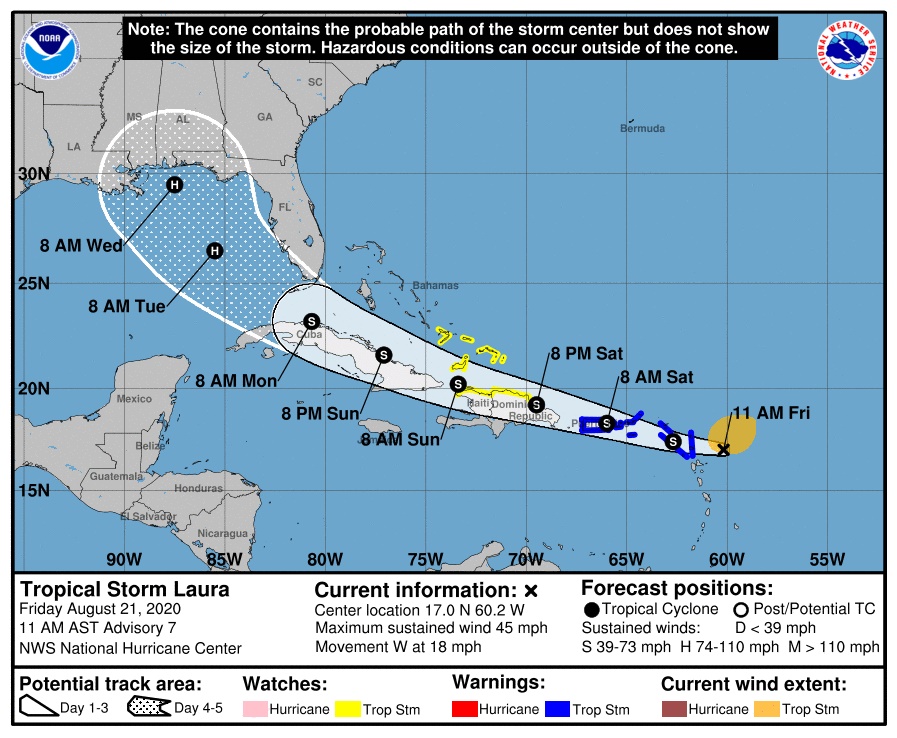 Projected path of tropical storm Lara over the next six days.

While the projection of twin hurricanes in the Gulf is frightening and unusual, it’s worth remembering at this point that it is just a projection. These storms are still five to six days from making landfall, and things could easily change. Lara could dissipate much of its energy in passing over Cuba. Marco could hook more firmly into the Yucatan and become disorganized. Or either storm could hit a pocket of warm water and pick up even more energy than expected. It’s just too early to tell. The projected track for Lara in particular is rated as “more uncertain than usual,” so while the image above may make an entry into the Gulf seem like a sure thing, it’s not.

Right now the biggest threat is likely to be from Texas east to the Florida panhandle, with the possibility of flash floods, storm surge, very heavy local rains, tropical storm force winds, and tornados. Stay tuned.