ARNOLDS PARK, Iowa — Walking down Broadway Street, flanked with nightclubs and restaurants, you would never know that the coronavirus is lurking here. The sun is shining, maskless people are buzzing about, and ice cream is selling. This is the 100 days of summer in which the Iowa Great Lakes region makes most of its money. Everything is open.

But this year, the vacation destination is also a regional coronavirus hot spot.

The local economy shut down in the spring for about a month. There were six cases recorded in the area by May 1, when Republican Gov. Kim Reynolds partially reopened restaurants, retail stores, and many other businesses in rural areas, like Dickinson County, where the lakes are located. There was also minimal testing.

By Memorial Day, only eight cases had been recorded in the county, which has a population of about 17,000 people year-round and nearly 100,000 in the summer. Although big events were canceled, the hotels began filling back up and the lakes were scattered with tourists.

As of August 7, cases in Dickinson were up to 377, and at least six county residents have died from the virus. Many additional cases may have originated here because of the constant flux of tourists, young and old, from places like Sioux Falls, Omaha, and Des Moines.

Why have there been there so many cases here this summer? Why is it so unusual to see people wearing masks, despite broad consensus that they are helpful in limiting the spread of Covid-19?

As a medical anthropologist who has studied the overlap of diseases and society around the world, I set out in June to understand what was going on in the Iowa Great Lakes region where I grew up. I interviewed more than 80 people all over town, reaching out to old friends and classmates, business owners, elected officials, and public health leaders.

Here is what I learned about my hometown region — and how its deep conflicts around the coronavirus reflect broader friction across the country.

Boaters congregate on Lake Okoboji in the Iowa Great Lakes region over the July Fourth weekend.

Dickinson County is largely white (96 percent), Republican (72 percent of voters returned a straight Republican ballot in the November 2016 election), and Christian (more than two-thirds). There is an overwhelming ethos of American individualism over collectivism, along with the cultural ideal of self-sufficiency and of pulling yourself up by your bootstraps. I heard many people say, “I am not scared of coronavirus,” or, “I’m not scared, I believe in God,” or “If it’s my time to go, God will take me.”

For instance, if you wear a mask around here, it reflects defiance against President Trump. When masks became this sort of political statement, most people described feeling deeply hurt — simply due to the divergent views that were (or weren’t) now spread across their faces.

This division recently came to a head in a heated open school board meeting on August 3 about reopening schools. Many board members invoked “freedom” and “individual choice” in their comments on masking at schools.

One school board member said he would not “dictate” what the children do because personal liberties were more important. Another member dissented by arguing that masking should be mandatory for high school students due to overwhelming safety concerns.

Sometimes this conflict was apparent even in individuals. On her way out the door, one member said she was going to “pray real hard” about what to do about masking in schools, moments after asking if the school board could get sued if it didn’t implement more stringent measures.

These conflicts are being fostered by a lack of local political support for public health measures, which reflects the greater coronavirus tragedy in the American Midwest. The superintendent of the school district, for example, plans to open schools with few safety measures in place, despite the local public health leaders providing opposing advice.

At the state level, Gov. Reynolds never instituted a statewide lockdown and recommended closing most businesses for only a little over a month. This meant some local business owners felt entitled to actively try to impede public health measures, including calling the hospital and demanding them to stop putting educational videos on Facebook because it was hurting business.

Statewide, the governor’s approval rating over handling the coronavirus outbreak is markedly low in part because of her lack of leadership on public health measures.

When I asked people what they have taken away from these leaders’ actions (and inactions), most say that because there was never a state lockdown and the state is open, there is no need to wear masks. This sentiment is perpetuated from the top and embodied in local behavior: The pandemic is over. Now you’re on your own. 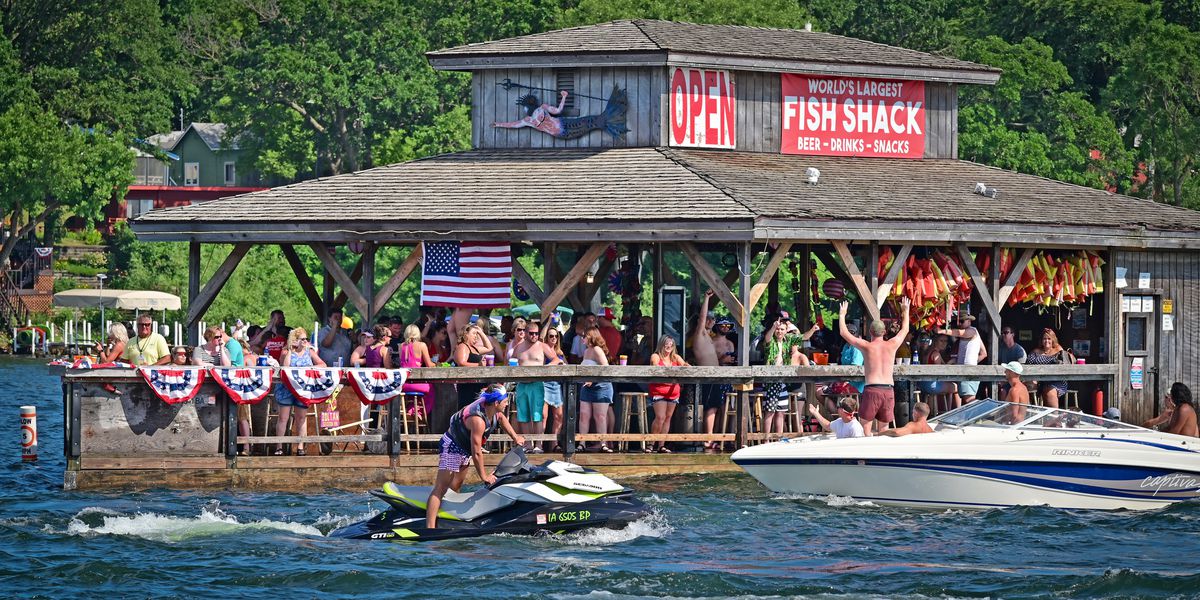 A water bar on Lake Okoboji over the July Fourth weekend.

“A theater of masks”

As a regional tourist destination, the Iowa Great Lakes region has a strong vacation vibe, even in the pandemic. Many young people in the area, for example, still exhibit the carefree frivolity of summer — packing bars, boats, and barges with booze.

“Everyone has Covid!” is a common excuse I heard to forgo masking and social distancing around town. Other people worry, “Nobody will take it seriously until someone prominent in the community dies.” (This is despite the fact that six people now have died, including some who were well known.)

Some (incorrectly) believe that because Covid-19 has largely affected the young in the region, there is a weaker strain of the virus circulating, dubbed “corona light.”

A 21-year-old waiter called mask-wearing a “theater of masks.” I see people touching their faces, moving masks up and down to take orders. Others say masks do more harm because they make you ingest more carbon dioxide (that’s entirely untrue). If you wear a mask, you’re a “maskhole” or a “fool.” Why use them? If nobody else wears one, why should I?

In a Facebook post, Richard Ashby, who was visiting from Texas, described an altercation over masks in the Iowa Great Lakes region over the July Fourth weekend. When he wore a mask in Casey’s convenience store, he was harassed by a group of young men not wearing masks. He and his partner were the only people masked at the convenience store: 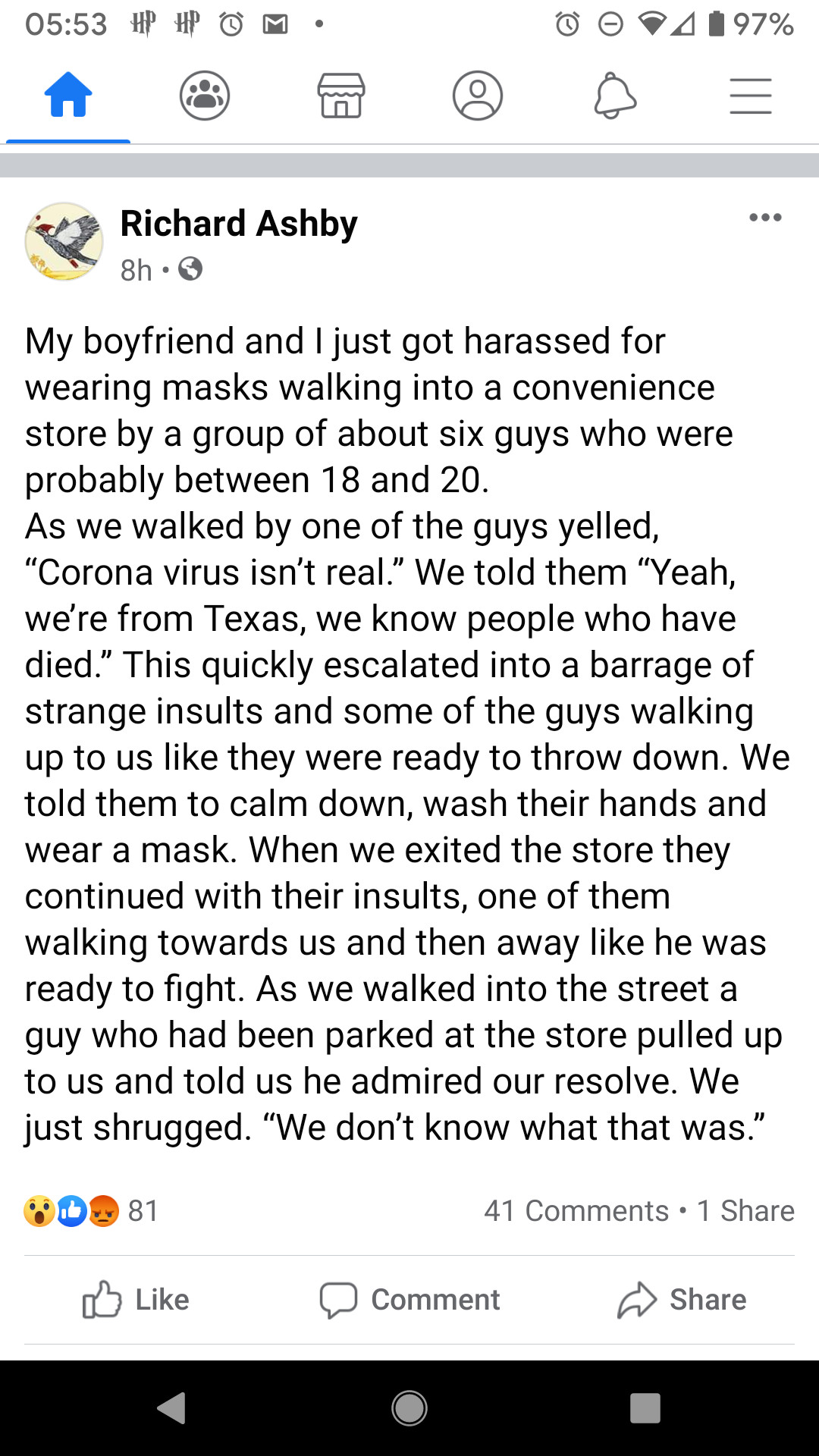 Elsewhere in this region, workers at national stores such as Walmart have worn masks consistently for months. I spoke to a manager at Menards, a regional home improvement chain, who said they have been required to wear masks since March.

When the staff first was required to wear masks, she made extras for her coworkers who had fewer means. She said it wasn’t a big deal and wants to keep herself, family, and community safe. Although, she notes, they are occasionally harassed by customers.

In the past month, both Walmart and Menards made mask-wearing mandatory for customers nationwide, regardless of local mask rules. Because of this, a high-ranking elected official told me, he “avoids” Walmart altogether because masking encroaches on his personal choice.

The divisive atmosphere in the Iowa Great Lakes Region around coronavirus isn’t that uncommon, especially in other parts of rural America where the response to the virus remains contentious. Without a unified state or national response, the patchwork we have created will allow coronavirus to spread, loved ones to die, and communities to fracture.

Many individuals remain conflicted about the situation, too, and beliefs around masks and staying home have created animosity among neighbors and friction among friends. One teacher told me her son’s friends changed according to the families who stayed home and those who did not.

These times are radically altering our community dynamics and demonstrate how splintered our society has become. But only by understanding one another and rebuilding trust in our institutions, science, and each other can we come out of this crisis stronger.

Emily Mendenhall is a Provost’s Distinguished Associate Professor in the Edmund A. Walsh School of Foreign Service at Georgetown University. She is the author of Rethinking Diabetes and more than 70 articles, books, and commentaries at the intersection of anthropology, public health, and medicine. She graduated from Spirit Lake High School in the Iowa Great Lakes. She thanks Lori Eich, Dr. Abby Adams, and Dr. Adam Koon for their comments on this article.

David Thoreson is an adventure photographer and author of One Island, One Ocean, about his expedition around the Americas. He has an extensive portfolio of photos around the Iowa Great Lakes region, where he spends his summers.

Every day at Vox, we aim to answer your most important questions and provide you, and our audience around the world, with information that has the power to save lives. Our mission has never been more vital than it is in this moment: to empower you through understanding. Vox’s work is reaching more people than ever, but our distinctive brand of explanatory journalism takes resources — particularly during a pandemic and an economic downturn. Your financial contribution will not constitute a donation, but it will enable our staff to continue to offer free articles, videos, and podcasts at the quality and volume that this moment requires. Please consider making a contribution to Vox today.

Greater than 130 intelligence officers are isolating as a result of Covid-19 outbreak, the report says