If you’re wondering how it is that a parade of protesters on their way to visit the home of St. Louis Mayor Lyda Krewson stumbled through a walled enclosure that seems as if it was ripped from the Middle Ages, the answer is—because it was simply in the way. As someone who went to night school at Washington University and was a frequent traveler to the Central West End area of St. Louis, it’s hard to overstate just how inconvenient, intrusive, and threatening these private places really are. They are not neighborhoods. They are tiny walled kingdoms inserted right in the midst of the city’s densest areas.

Portland Place, and adjoining parks and streets in St. Louis

If you notice that the streets and blocks surrounding this area are mostly businesses, apartment buildings, and small homes, that’s exactly the case. A block to the South is the edge of Forest Park, as much the heart of the city as Central Park is to New York—maybe even more so, since that’s where the zoo, the art museum, the history museum, the science museum, and much more are located. To the north is Delmar Boulevard, a thriving and diverse business and entertainment area. Kingshighway, immediately on the east, is the area’s chief north-south highway, and just out of view  is a massive complex of hospitals that is both a major employer and key to regional health care. This is a busy place, heavily trafficked both by cars and pedestrians. If you’re traveling from the gathering points on the right side of this map, to the mayor’s home off the left side—which is exactly what Black Lives Matter protesters were doing—Portland Place is right in the middle.

From above, it’s hard to see the stone wall, built in 1888, which surrounds this “autonomous enclave.” But it is possible to zoom in enough to give a sense what’s behind those walls. 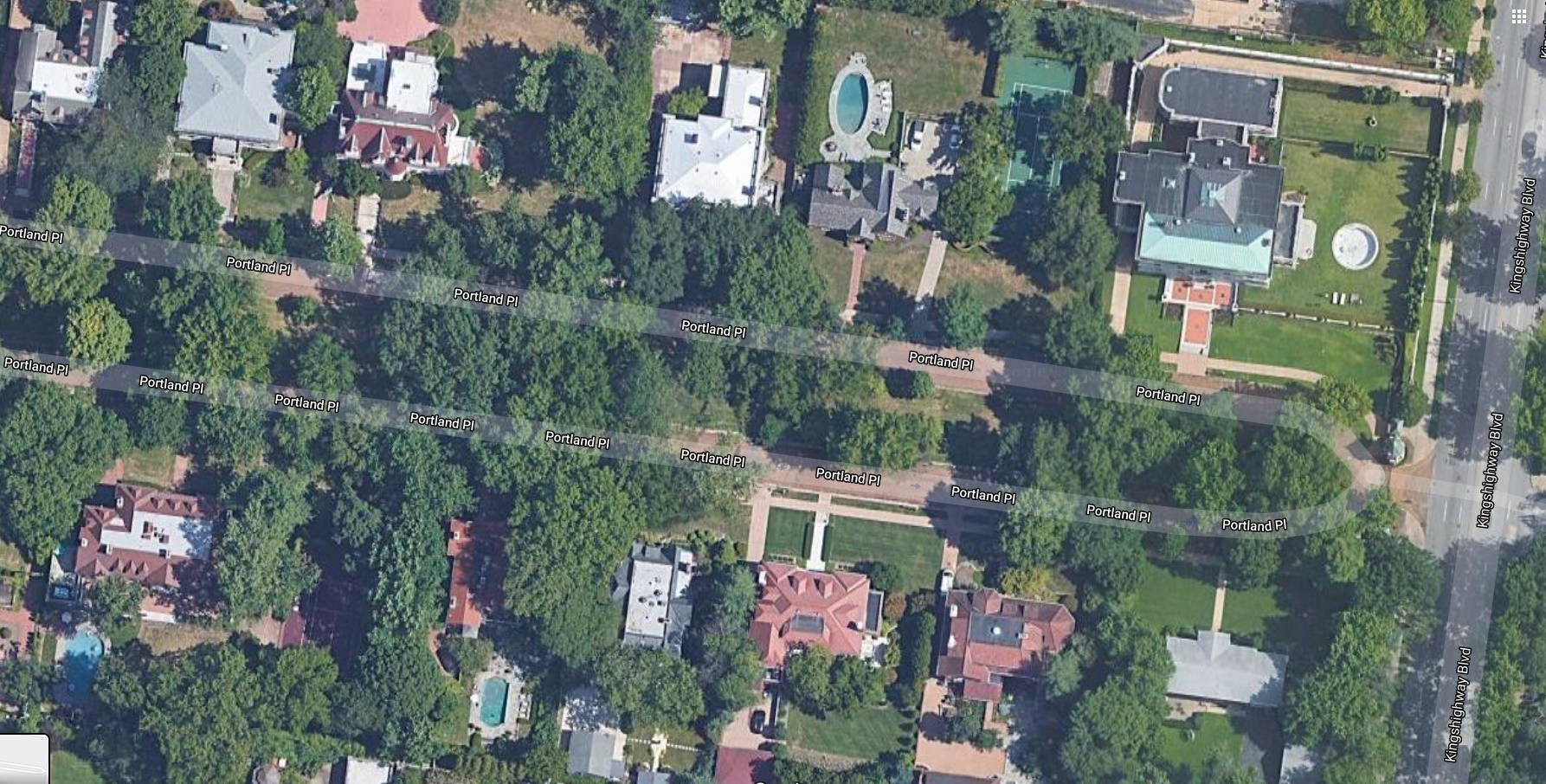 Portland Place, with home of gun-waving lawyers on the right.

Marchers on the way to the west passed through the gate at the eastern edge of Portland Place as they were simply walking through. Despite later claims and images of a mangled gate, reports at the time indicate that the gate was open and undamaged when marchers passed through. From personal experience, I can tell you that it’s perfectly possible to turn into this road by mistake, only to be chased down by extremely brusque and aggressive security. Note—not the police. To add some extra irony, Portland Place didn’t use the regular city’s police force from the beginning; They have their own private security to see that the unwashed masses steer clear. Apparently step one in being a real American is that you don’t share a police force with everyone else. Step two is that you buy an AR-15 because you don’t trust your private security.

Just as with Upper West Side homes in New York, there are some lovely old mansions lining the park to the south. But these private places are something else altogether. They’re not just clusters of massive old homes, they were explicitly created to provide isolation for the wealthy, white, upper crust. They started in the 1850s under the auspices of allowing residents to “maintain proper standards.” The city explicitly awarded these areas the right to set their own rules when it comes to how homes are constructed—and who was allowed to live there. For generations, no one lived in one of these places without the explicit permission of all the other residents inside the walls. So it’s easy to imagine how very, very diverse these areas are not.

Portland Place is just one of many such enclaves that were created for the sole purpose of allowing wealthy whites to literally wall off some of the choicest parts of the city and decide for the next century and a half who would be allowed to not just own a home in their area, but to even walk along their sidewalks. Before the 1960s, the internal regulations on these private places were explicitly, openly racist. Now, with few exceptions, they’re just privately, secretly racist. In a city where African Americans make up half the population, the Black population of Portland Place is zero.

Mark and Patricia McCloskey weren’t waving around loaded weapons to defend their home. They were threatening deadly force at people who had the audacity to walk past barriers that are, as much as any Confederate statue, a monument to white supremacy. For all the progress of the last few decades, St. Louis remains an enormously segregated city, one where white flight has left whole neighborhoods abandoned. This is, after all, a city where the annual fourth of July celebration was, right up until 1992, a continuation of a white supremacist ritual devised around the same time those walled enclaves were being built.

What the McCloskeys did was a crime that deserves to be prosecuted and result in their disbarment. But the place where they live is an affront to decency every single day.

Rachel Maddow Blasts Trump For Refusing To Acknowledge 200,000 People Who Have Died Of COVID